Week 5 of the Flow Traders Investment Competition concluded with yet another week of gains as investors are optimistic about a potential new fiscal stimulus package in the States, and the first vaccination programmes are bound to start soon. US employment numbers fell short of expectations however, as the country only added 245,000 new jobs in november, far fewer than the 460,000 additions predicted by economists.

As indices across the world rose, the MSCI World index gained 1,47% this week. US equities performed relatively well compared to other countries, as the S&P 500 and Nasdaq gained 1,67% and 2,12% respectively. Other developed countries fared less well, although they still managed to achieve modest gains. The Eurostoxx 600 index gained 0,21%, with the Japanese Nikkei 225 posting an equally meager return of 0,40%.

Gains in US equities are partially supported by the hopes for an end of the year stimulus bill that is garnering bipartisan support in the US Capitol. Stimulus talks have been delayed due to friction between the Democrats and Republicans, as Republican Senate majority leader Mitch McConnell clashes with Democratic House Speaker Nancy Pelosi. Senator McConnell previously supported a $500 billion relief bill, while Congresswoman Pelosi is pushing a $2.2 trillion deal. A group of bipartisan politicians are set to unveil a $908 billion dollar deal as early as today, raising hopes for a deal before the end of the year.

As far as vaccinations go, the United Kingdom is planning to start their vaccination programme this year after their record breaking vaccine approval. The British Medicine and Healthcare products Regulatory agency, or MHRA, has recommended the British government to approve the Pfizer/BioNTech Covid-19 vaccine for use in it’s vaccination programme. As the first western country to approve the vaccine for general use, the government faced some initial scrutiny from its continental neighbours who are taking a slower approach. This scrutiny came amidst the discovery that the Astrazeneca vaccine trial had a major error, where some clinical trial participants were only given half a dose during the first injection.

Turning to the Flow Traders Investment competition, Hermanszoon Capital continues to top the charts with an M^2 of 10,33%. While Alpha Investments managed to climb to second place with a 4,32% M^2 by taking Metrics Fund’s spot, they still have a long way to go if they want to  take Hermanszoon Capital’s crown. Floryn Vrouwen has lost most regarding the rankings by dropping 27 spots, while not losing as much in terms of absolute return as Mayfair Investors, who lost 3,20%. 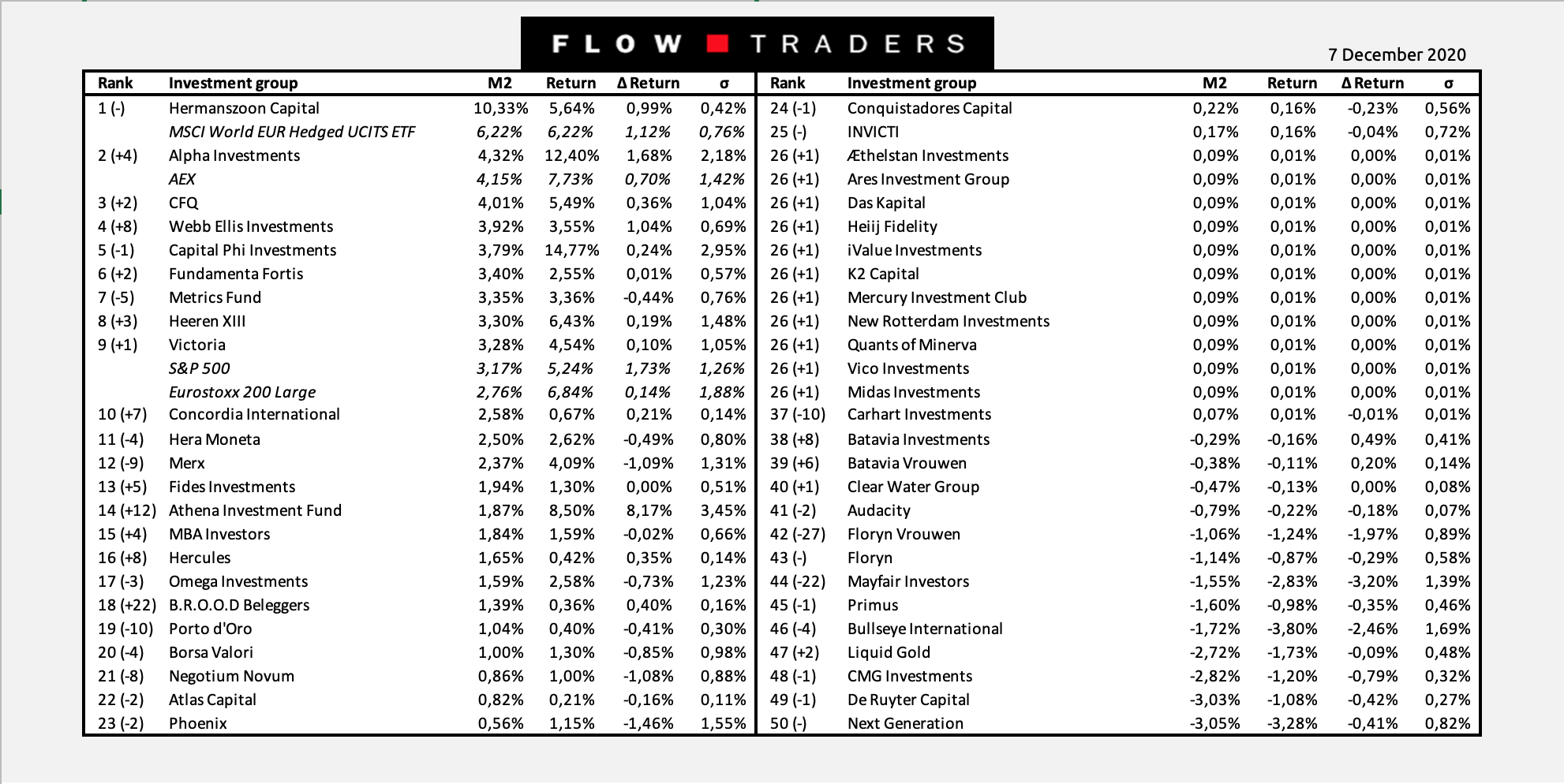