This week was once again characterized by record highs for equities. Both the S&P500 and Nasdaq rose higher than they ever have amidst continued vaccine optimism. The VIX, an index measuring expected market volatility, dropped to levels not seen since before the pandemic started back in March. All of this could be partially driven by the fact that President Trump has instructed his team to cooperate with the transfer of power to President-elect Joe Biden.  Furthermore, president Trump has confirmed that he will leave the White House if the electoral college formalizes Biden’s win in the election.

American stocks are not the only ones who have made gains last week: the Dutch AEX has gained 2,52%, the German DAX 1,52%, and the French CAC40 1,86%. When considering the broader European market, the European STOXX600 index has gained 1,03%. Things are looking up in Asia as well with the Japanese Nikkei 225 posting an impressive 3,94% gain. Meanwhile in China, the Shanghai Composite Index has risen 0,89%, while in Hong Kong the Hang Seng has gone up by 1,67%

Life is not all about sunshine and roses though, as indicated by the Australian S&P/ASX 200. While the index is still above the levels it kicked off with last week, there has been some downward pressure since Wednesday. Beijing has thus far imposed trade restrictions on Australian exports such as coal, barley, wine, timber and beef. Such restrictions could be a worrying sign for other democracies, as these measures coincide with a ‘list of grievances’ the Chinese government has published. This document not only contains familiar complaints about Australian comments on Taiwan and Beijing, but worryingly also about statements made by domestic Australian thinktanks and media.

With regards to the Investment Competition, Hermanszoon Capital remains the top performer with an M^2 of 8,63%. The runner up also remains unchanged, as Metric Fund is still holding out firmly in second place with an M^2 of 5,37%. Capital Phi once again takes the crown in terms of absolute return with 3,54%, although they have lost their third place to Merx. Athena Investment Fund and Mayfair Investors both performed extremely well concerning the ranking; both gaining 21 spots. Contrary to CMG Investments which apparently had a bout of bad luck resulting in a loss of 24 spots in the ranking. 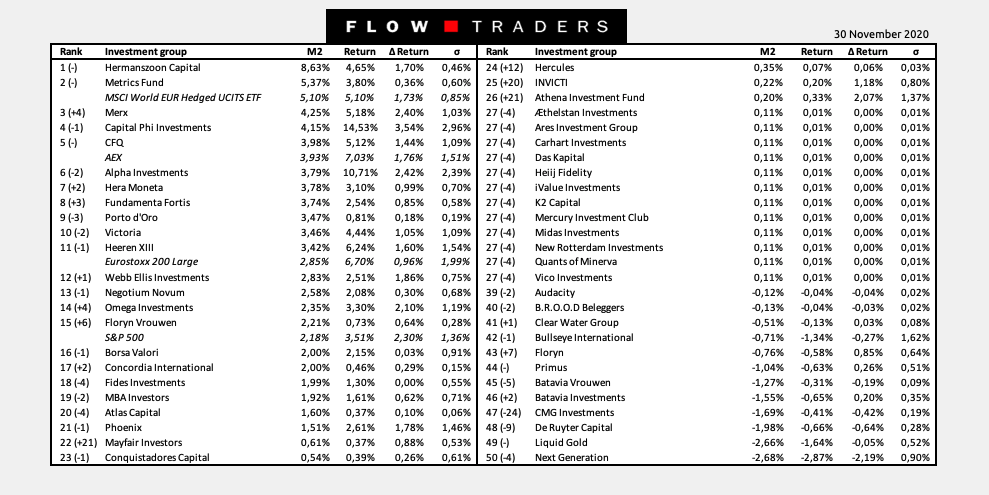