While the end of 2020 rapidly approaches, and investors are hoping for a strong end-of-year rally, global markets have remained somewhat stable over this past week. Both the DJIA and S&P 500 lost approximately 1%, whilst European indices such as the FTSE 100 & AEX have lost between 0,05 to 0,2%. Even Though the VIX index (which has had an average level of 12,9 at market all-time lows) climbed back up to 23,50 , which could indicate that investors are expecting volatility in the upcoming period, it failed to prove significant when looking back at the 5 day overall average.

Meanwhile, Brexit negotiations have once again reached a stalemate after Boris Johnson and Ursula Von Der Leyen failed to reach any form of agreement on Wednesday. Both parties are now in the talks of drawing up an emergency plan for the likely scenario that no arrangement will be made before the transition period, starting on the first of January next year. Whilst investors are still cautiously eyeing any political development coming from the UK, some parties have already pre-emptively started acting on the potential implications that no agreement might bring about, with J.P Morgan shifting $120 billion of its UK based assets to Germany.

Despite these political tensions, the news that 95-year-old Margaret Keenan kicked off the UK’s vaccination effort has rendered investors optimistic. Whilst governments are collectively deciding to extend the duration of their respective lock-down measures, it seems to have little impact on stock prices. As members of the VRBPAC (vaccine and biological products advisory committee) have recommended the FDA to authorize the usage of the Pfizer / BionTech vaccine in the United States, it seems that investor confidence has only increased during the last week.

This was further amplified by anticipations of additional financial stimulus packages in western markets, with the ECB following the United States by proposing additional pandemic relief. On Thursday, ECB President Christine Lagarde announced that they will expand their stimulus package by an additional 500 billion Euro until March 2022 and will pin the euro’s interest rate at its current level. This decision was however received with mixed feeling, causing markets around the Eurozone to drop from their intra-week highs, somewhat stunting the gains that had been made earlier in the week.

There are, as always, exceptions to the rule. After presenting five-year data showcasing a 0% Recurrence rate for their Phase II breast cancer treatment, Greenwich LifeSciences saw its share price soar from $26,81 to a whopping $129.93 on Wednesday afternoon. The arrival of Airbnb on the NASDAQ was also a story of success, with the introduction price of $68 climbing up to $144,71 on its first day.

The most important developments, however, are of course happening within our own Flow Traders investment competition. For the first time in 4 weeks, Hermanszoons Capital has been dethroned by CFQ, who now top the chart as the top performer with a M2 of 6,07%. The top spot is highly contested, so it is sure to become a neck and neck race in the following weeks. Borsa Valori has shot its way into the top ten as well, and was the biggest riser by moving up ten positions. Besides moving up in the competition, they were also able to reel in the highest absolute return change at 1.26%. Concordia International was less fortunate, as they were kicked from the 10th overall position into 36. 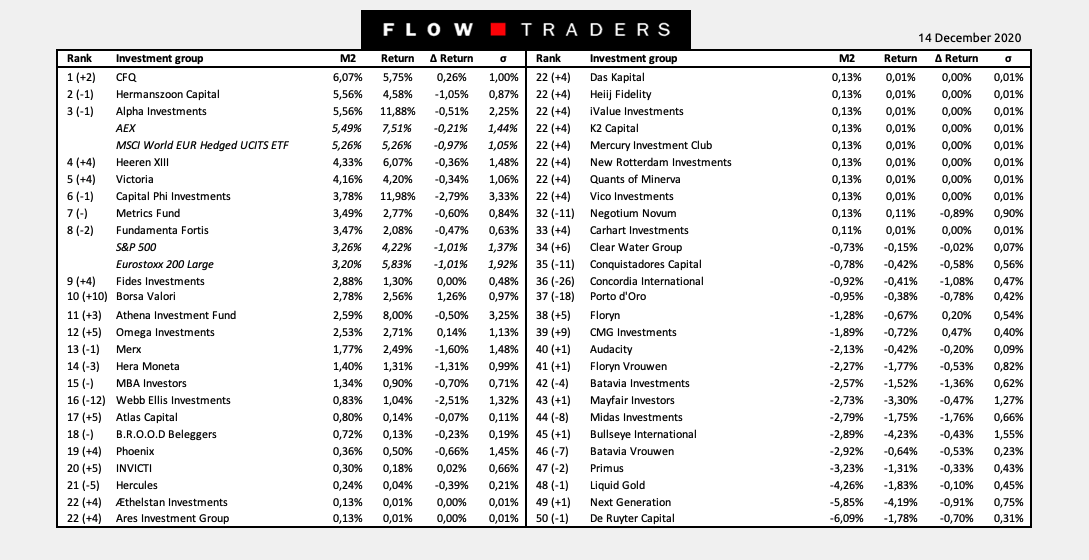