Week 7 of the Flow Traders Investment Competition, with fairly stable markets, has come to an end. Equities in the US ended the week in the green with DJIA and S&P 500 rising 0.24% and 0.91% respectively. European indices showed slightly bigger gains as STOXX Europe 600 rose 1.08%. Big things were happening over the weekend however, with important stimulus and Brexit related deals left undecided on Friday night.

The week started with the introduction of a restrictive lockdown in The Netherlands lasting until at least the 19th of January. Schools, non-essential stores, and cultural institutions had to close their doors, and stores that sell both essential and non-essential goods have to close off parts of their floors. These strong measures were a response to the worrying development of COVID-cases, as hospitals saw a 20% increase in patients week-over-week.

There were also some interesting developments surrounding the $900 bullion Covid relief bill in the United States which we briefly discussed two weeks ago. The package is said to include stimulus checks of $600 per person, $330 billion worth of small business loans and a $300 per week increase in jobless benefits. On Friday night congressional leaders said they were close to a deal, but votings might continue over the weekend. If that were the case, a government-shutdown would happen as government funding runs out on Friday.

Another deal that remained undecided Friday night was the Brexit deal. The European Parliament set a deadline on Sunday for the Brexit negotiators to come to an agreement. Whether a deal will be reached or not depends on the willingness of the EU to give up fishing rights in the UK waters. Boris Johnson said he did not want the UK to be the first sovereign land that had no control over its own waters.

A lot has happened in the Flow Traders Investment Competition rankings. CFQ had a great week and continues to be the top performer with an M^2 of 7,58%. Victoria managed to claim second place but the gap with first place is widening. CMG Investments made a spectacular jump, moving up 26 positions from 39th to 13th place. It comes at no surprise that they had the highest absolute return change as well with a whopping 10.83%. Things didn’t go so well for Borsa Valori. After claiming a spot in the top 10 last week, they have now lost 28 positions. 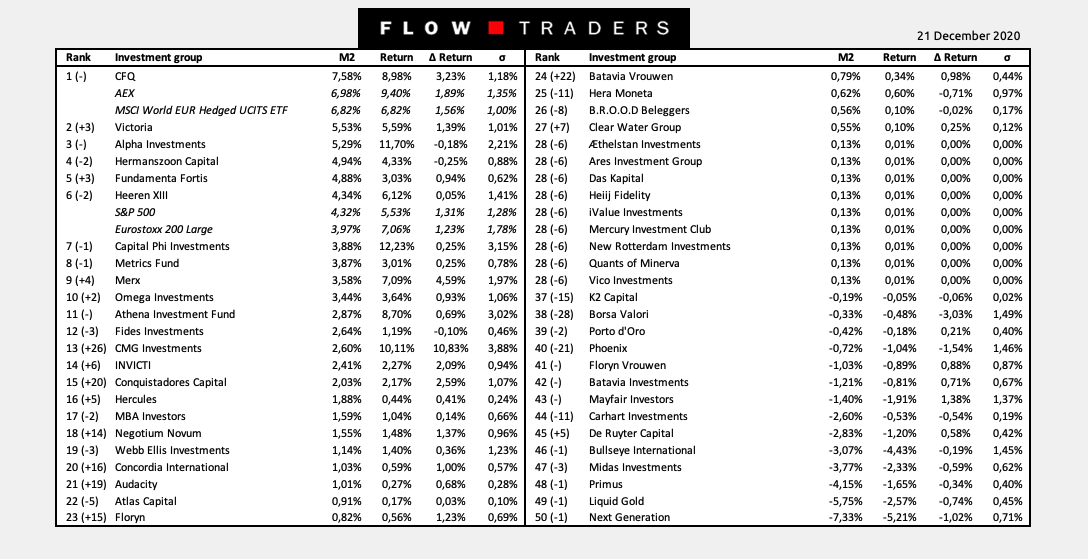