Am I too late? – The art of dealing with investor FOMO 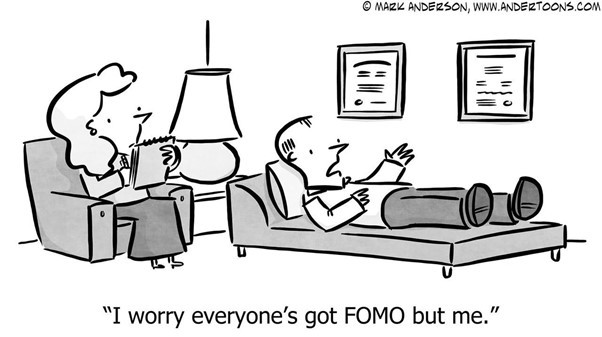 An all too familiar occurrence in this day and age, is logging into your newsfeed of choice, and seeing one of the following statements:

“Bitcoin tripled in price in less than one year!

“E-commerce stocks have grown by 200% over the past year, this is why you should invest NOW”

It could happen that upon reading these articles you start growing uneasy, or even start slapping yourself against the back of your head. “But I was thinking about investing in one of these assets a while ago! Imagine what I could have earned with all those excessive returns…”. You are consumed by a constant feeling of dread, and out of desperation you decide to open a position on an asset that has gained 20% in one week because you “don’t want to miss out on the ride”. But instead of missing the ride, you fall off the rails completely, as the price of the stock you just bought tumbles down by 15% in the next week. And just like that, you have become a victim of investor FOMO.

Although the above scenario will most likely not trouble the experienced investors at B&R Beurs, it is important to be aware of this psychological adversary. The fear of missing out (FOMO) phenomenon is best described as an experience of anxiety that occurs when an individual fears that he/she is missing out on information, events or decisions that could make their life better. Think of examples such as seeing that all of your friends are going to a party while you are still at home, or resisting the urge to buy a pair of shoes that has a “one day only” discount while you shouldn’t be spending any money. Although the feeling of anxiety you experience is a remnant of your evolutionary survival instinct (fearing that you will be left behind by the group), it has become increasingly more pronounced over the past decade due to the introduction of social media. At any time of the day, you are exposed to notifications about ongoing events, and the successes of others. This frequently leads to counter-productive decisions, such as increased stress and irrational decision-making.

This also applies to financial markets. We are constantly reminded that equity valuations around the world are at all-time highs, and that indices such as the NASDAQ and the S&P500 have been performing exceptionally well. Investors could then be tempted to invest into some asset that they read about without doing their proper due diligence, resulting in excessive risk taking. This is because two distinct psychological biases are at play: the survivorship bias, which causes individuals to only focus on winners (i.e that one guy from reddit who made $15 million dollars trading crypto) and neglect the losers (the thousands of other people who have traded crypto and lost money), and recency bias, which learns us that we are more susceptible to recent information (a stock gaining by over 20% yesterday) instead of older information (the same stock underperforming the market over the past 10 years). These two biases combined cause an entirely new effect when combined: the bandwagon effect. Once people see that a substantial amount of people are buying up a financial asset, and are sharing the opinion that the price is likely to increase in the foreseeable future, they are more likely to adopt the same views as well. A feedback loop then starts where more and more people “jump on the bandwagon”, and the group grows even larger. This particular phenomenon is especially relevant for financial markets, as stock valuations are heavily influenced by investor sentiment.

A recent brilliant example of investor FOMO was instigated by none other than Elon Musk. After he published a tweet that people should “use signal” ( Musk was referring to the messaging app Signal), it caused a frenzy on the market. Probably fueled by the ability of Musk to seemingly create ridiculous stock returns, the legions of retail and Robinhood traders jumped on the opportunity, and started buying up Signal shares in droves. Within a day the price of Signal had shot up by over 12.000(!)%, and investors were walking on cloud nine.

Or so they thought. As it turned out, it were not shares of Signal (the social media app) that had been bought, but rather shares of Signal Advance, which was an entirely different company altogether. Signal itself is a non-profit organization and therefore does not even have a ticker (the way that stocks are listed upon an exchange, such as AAPL etc.) and therefore the two companies got mixed up, and by being afraid of missing out, investors quickly jumped onboard the train. Although the current share price is still doing better compared to where it started (currently trading at $6,24 as opposed to $0,08 in February), investors who got in late because of FOMO surely had a high price to pay. Let their losses be your gains by learning from this, and let it serve as an example for why you should try to eliminate emotions in your trading as much as possible.

What are then some useful tips to help combat the next FOMO situation you encounter? Firstly, realize that when you are doubting whether you are too late to the party since the share price is skyrocketing, you probably are. Any real significant returns are earned by investors who do proper research and get in early, as they will not panic from excessive volatility in the market caused by sentiment. Secondly, make sure that you have set upper and lower limits for yourself, so that you are sure when the time has arrived to close your position. Although FOMO is a reality that all of us face from time to time, having a plan provides you with some guidance to make better grounded decisions. And finally, base every decision to invest upon your own judgements and insights. You can always integrate financial news and analyst opinions into your decision-making progress, but due to the nature of FOMO, it can quickly occur that you only start selecting pieces of information that you “want to read”. There is an abundance of information out there, and even more people who would benefit from you buying their assets. It is therefore easy to be swamped with an image of the world that is better than it seems if solely trusting on the input / behavior from others. Take these things to heart, and you are well on your way on not becoming another victim of FOMO, especially when you notice people such as Paris Hilton and your next-door grandmother neighbor are telling you that you should buy Tesla shares as well.