The Stonk Market: a recap 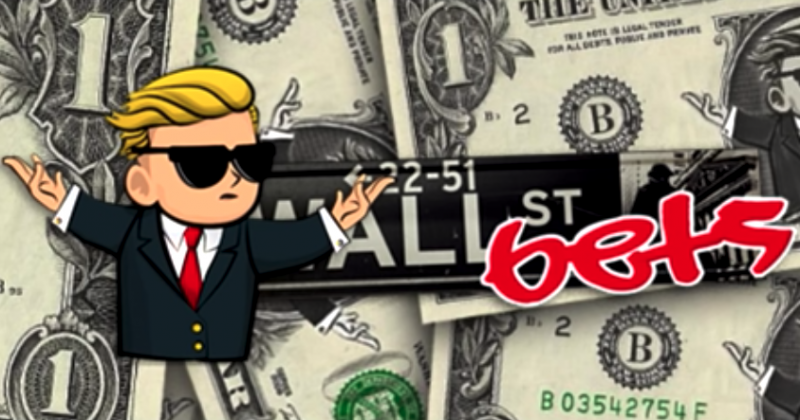 GameStop ($GME), a struggling video game retailer, caught Wall Street shenanigans by tremendous surprise last week, thanks to an army of retail traders that are members of the WallStreetBets (WSB) subforum on Reddit. $GME shares skyrocketed 400% past week, thereby closing January with an immense 1600% gain. $GME was put into the limelight last week, and reached headline news every day since. In this article, I will provide a summary of what happened last week. I will refrain from any normative statements (I like the stock though), and purely give a description of the main events.

So what is the problem exactly? A band of amateur traders in WallStreetBets forum, whose members have tripled to 6.5 million in just a week, aimed to bid up heavily shorted stocks “to the moon,” creating massive short squeezes that some believe caused a turmoil in the broader market. Their first victim, GameStop, is a struggling game retailer which is a popular short target on Wall Street. Over 130% of its float shares had been borrowed and sold short, one of the most shorted names in the U.S. stock market, according to several data providers. Retail traders realized they could cause an artificial price increase in $GME if enough of them bought, forcing hedge funds betting against the stock to cover their losses by buying back the shares themselves.

The era of the WSB-army began on Monday with $GME doubling in share price, eventually closing +18%. Multiple trading halts were imposed on this ticker. The trading volume drew quite some attention as $GME was traded more than any S&P 500 stock, even more than Tesla!

Meanwhile in the WSB forum, more and more traders push each other into taking more and larger positions in GameStop. One top post mentioned: "IM NOT SELLING THIS UNTIL AT LEAST $1000+ GME." Another post said: "IF THIS REACHES $500, I WILL GET A GAMESTOP TATTOO.". The squeeze game only starts to intensify.

The saga continues, and launches even stronger on Tuesday. The rally gained more momentum after Social Capital's Palihapitiya said in a tweet that he bought GameStop call options betting the stock will go higher. Subsequently, shares of GameStop surged to nearly $150 on Tuesday. Tesla CEO Musk even added more oil to the fire by tweeting to his 42 million followers "Gamestonk!!". Meanwhile, Reddit users continued to show off their massive returns from trading in GameStop. One trending post featured a screenshot of the user's brokerage account with an over 1,000% return on the stock.

By Wednesday, GME covered all major media and reached all headline news. Remember, the aim of this Reddit-army of traders was to induce a short squeeze, at the expense of hedge funds with large short positions. The first victim well on Wednesday. CNBC's Andrew Ross Sorkin reported that Melvin Capital closed out its short position in the stock on Tuesday afternoon after taking a huge loss. In addition, Citadel and Point72 had to infuse close to $3 billion into the hedge fund to shore up its finances.

The increased sentiment and sense of victory among Reddit-traders also resulted in spill-over effects. Other micro-caps that were being shorted heavily caught the eye of the army. While GameStop kept soaring, firms like AMC Entertainment, Bed Bath & Beyond, BlackBerry, and Nokia also rallied. The group of these stocks were quickly labeled as "meme" stocks. AMC jumped 300% on Wednesday alone with more than one billion shares changing hands in its highest volume day ever. Bed Bath & Beyond popped 43% Wednesday, while Koss soared 480% on that day.

Of course the fairy-tale of ever-increasing asset pricing couldn't last forever. GameStop dropped 44% on Thursday, falling for the first time in six days as Robinhood (RH) and Interactive Brokers (IB) limited trading in several of the heavily shorted names to closing positions only, meaning that traders could not buy up shares as the prices fell. In addition, RH and IB hiked their margin requirements on trades, making it harder for traders to use leverage. Other brokers too hiked margin requirements. Also here, in the Netherlands, multiple brokers (like DeGiro) encountered "technical problems". Other speculative meme stocks also dropped sharply.

The decision by RH, which used to be known as THE free-trading friend of the small investor, caused a backlash with its customers taking to social media to express their outrage. On Reddit, users , for example, encouraged each other to give RH a one-star rating. Within a day, the rating in the Play Store went from a 4.8 to a fat 1.2!

It also drew the scrutiny of political officials from both sides of the aisle. Rep. Alexandria Ocasio-Cortez weighed in on Twitter, calling RH's action "unacceptable." Republican Senator Ted Cruz tweeted "fully agree" in response to Ocasio-Cortez, which is quite a rare sight in general.

RH CEO Vlad Tenev came on CNBC that night to justify and rectify their actions. They had  to meet rising deposit requirements and denied it was because of any liquidity issues. RH said its deposit requirements soared ten-fold during the week. RH clears its trades through its clearing broker, which is a member of a central clearinghouse on Wall Street. This clearinghouse ensures orderly settlement of trades, a process that takes two days. For a stock rising 100% and falling 40% in single sessions, two days becomes a much riskier time period and more collateral is demanded according to the clearinghouse rules.

By the end of the week, RH raised $1 billion overnight from investors and tapped into credit lines to ensure it can meet those requirements. Shares of GameStop spiked again on Friday as Robinhood said it would resume limited trading in these highly volatile names.

However, the speculative stocks gave back a chunk of their gains after Robinhood tightened restrictions throughout the day, only allowing clients to buy only a single share of GameStop. The stock trading app also expanded its list of restricted stocks from 13 earlier in the day to 50. GameStop, which had doubled in earlier trading Friday, traded off its highs. It would recover into the close and end Friday up more than 67%

By the end of the week, The Securities and Exchange Commission (SEC) mentioned it is reviewing recent trading volatility that has led to a meteoric rise in GameStop and AMC. The regulator also pledged to clamp down on brokerages that may have "unduly" limited customers' ability to trade.

The first chapter of this saga ends. As I am writing (Monday, 1st of Feb), a new chapter unfolds. The rally seems to dampen, and economists are starting to ask more fundamental questions. How can risk models be adapted to take unpredictable speculative long attacks into account? What are the consequences of large scale short squeezes? How will the SEC deal with this case? The coming days will especially be focused on the latter question. The former two questions, however, are food for thought for the reader.