Last week consisted of mixed equity performance, since investors continue weighting optimism about the reopening versus inflation concerns. Small-cap and growth stocks lagged for the second consecutive week, signaling a potential pause of their strong performance in the past 12 months. Similarly, communication services stocks fared worst within the S&P 500 Index, dragged down by sharp declines in shares of several traditional media companies following a stretch of strong performance.

In Europe, equity rose based on betting on economic recovery, reversing earlier losses stemming from concerns about additional restrictions to curb the spread of the coronavirus. The STOXX Europe 600 Index added 0.85%, France’s CAC 40 ended down modestly, while Germany’s Xetra DAX Index, Italy’s FTSE MIB, and the UK’s FTSE 100 Index posted gains. In Japan, the Nikkei 225 Stock Average declined 2.1% while the broader TOPIX gave up 1.4%. Chinese stocks, on the other hand, recorded a weekly gain, thanks to a rally on Friday after the country’s central bank signaled that it was not about to tighten monetary policy. The Shanghai Stock Exchange Composite (SSEC) Index rose 0.4%, whereas the large-cap CSI 300 Index ended up 0.6%.

Conflicting signals about progress in fighting the coronavirus appeared to be a major driver of sentiment. Stocks also seemed to come under pressure from rising infection numbers in the US, as well as renewed lockdowns in Europe. In addition, there is increasing tension regarding vaccine supply between the Eurozone and the U.K.  On Thursday, however, President Joe Biden may have contributed to an afternoon rebound by stating that he now aims to vaccinate 200 million Americans in the first 100 days of his administration instead of the 100 million originally targeted.

On the economic front, the week brought a number of downward surprises in economic data.  February U.S. existing home sales fell 6.6%, roughly twice expectations, while new home sales tumbled 18.2%, nearly triple consensus estimates. IHS Markit’s current gauges of manufacturing and service sector activity remained elevated, suggesting that economic activity was bouncing back in March. The University of Michigan also revised its gauge of March consumer sentiment higher, while weekly jobless claims fell much more than expected. Inflation data, the most important economic news this week perhaps, remained muted. Personal consumption expenditures index increased by 1.4% YoY in February, down from 1.5% in January. The yield on the benchmark 10-year U.S. Treasury note decreased through much of the week but appeared to rise somewhat in response to Thursday’s claims data. For Europe, business activity unexpectedly grew in March. The flash composite Purchasing Managers’ Index (PMI), rose in March to 52.5, compared with 48.8 in February. (PMI readings above 50 indicate an increase in activity levels). Activity in the manufacturing sector expanded the most in 23 years, offsetting continued weakness in the service sector.

Let’s conclude this ICU with the investment competition results. It was another tough and dynamic week. For the second week in a row, Conquistadores tops the chart with a tremendous B&R M^2 of 24,13% and a steady weekly return of 3,05%! The gap between the number one and runner-up Merx is becoming larger compared to last week. On the other side of the spectrum, we have Vico and the so-called Quants of Minerva, with a magnificent M^2 of -11,58% and -13,04% In absolute terms, the largest gain has been achieved by Batavia Vrouwen (+3.51%). On the other hand, CMG investment managed to lose 8.54% somehow.

Meanwhile in the Second Investment Competition, nothing has changed in terms of the rankings while every group had a negative return the past week. New Rotterdam Investments lost the most with -6.57% while Das Kapital survived the onslaught the best, only loosing 0.97%. Aurelia still has the lead with an M^2 of 3.49 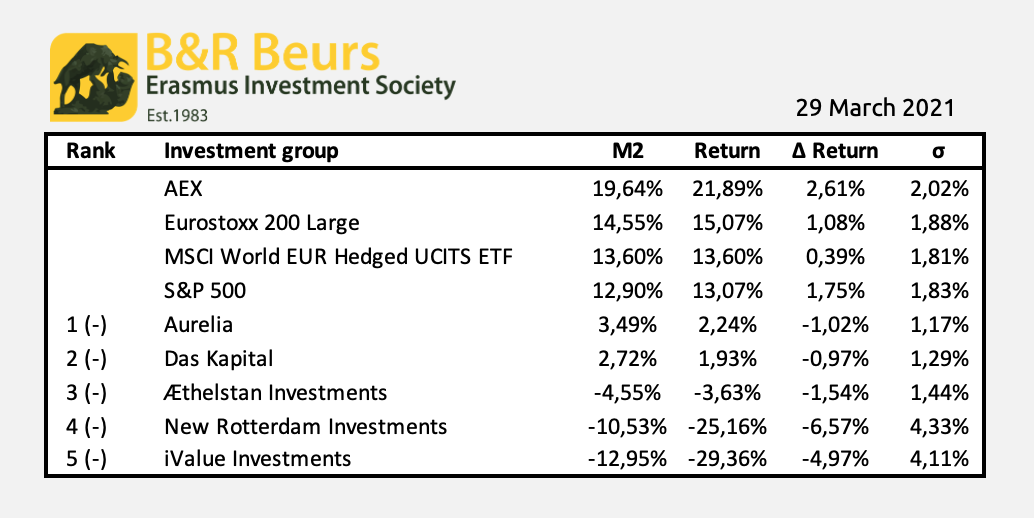