Welcome to this investment competition update. Last week ended with little action in the markets as trading volumes were far below their average. While the S&P 500 closed 1.25% up from Monday, the EURO STOXX 50 ended up only gaining 0.21%. Let’s take a look at some of the headlines from during the week.

The week started with the announcement of the U.S. smashing expectations and adding 916.000 jobs in March, beating the previous high of August 2020. In addition to that, the unemployment rate fell to 6.0% from 6.2%, to which markets logically responded positively on Monday night.

On Wednesday, investors took note of the annual shareholders letter published by JPMorgan. In it, the company’s CEO expressed his positive outlook on the economy until 2023. “Strong consumer savings, huge deficit spending, more QE, expanded vaccine distribution and a $2.3T infrastructure plan” could lead to “economic opportunity for everyone”.

The just mentioned multi-trillion-dollar infrastructure plan experienced some headwind on Monday. Republican Senator Roy Blunt urged the administration to scale back the plan in order to get support from the GOP. President Biden took note but said he is willing to through with the American Jobs Plan.

Big headlines in the crypto space as well. For the first time, the total market capitalization of the crypto market has reached $2 trillion, only 2 months after reaching the $1 trillion mark. This latest surge in the market was for some part fueled by Ethereum reaching new all-time highs.

Let’s now turn to our very own Flow Traders Investment Competition where the rankings this week have been fairly stable. Our number one and two are still Conquistadores Capital and Merx, but the gap between the two teams has shrunk somewhat. Fundamenta Fortis did drop one place and lost their third-place to Alpha Investments. Floryn Vrouwen made the biggest jump and rose 5 spots to 29th.

As for the second B&R Beurs Investment Competition, there are no changes in rankings to report on. Das Kapital is still on top after they took the throne from Aurelia the week before. The gap between the two has been increased by Das Kapital achieving a weekly return of 2.17%, the largest of all teams. Like last time, Aurelia was the only team to receive negative returns for the week. This has created the opportunity for Æthelstan Investments to move to second place, as the difference in M2 between the two teams is not as large anymore. 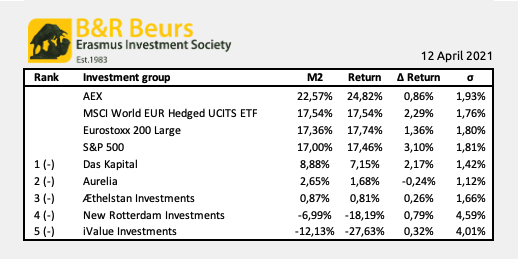