With the summer right around the corner, the preemptive summer breeze seemed to comfort and excite investors around the globe, after almost all major indices managed to post positive gains over last week. The AEX gained 0.84%, the FTSE 100 a smaller 0.22%, whilst the S&P 500 and NASDAQ moved up by 0.84% and 1.42% respectively. Although this means that most of the major indexes are once again close to their all-time highs, fear of uncontrolled inflation still casts a looming shadow over financial markets, as the FED’s inflation target of 2% was exceeded by 1.1% over 12-month period from April 2020. Although some of this increase in consumer prices can be explained by demand picking up after the lifting of several covid restrictions, it is yet to be determined how significant the impact of covid relief and quantitative easing is for the American Dollar, which is something to surely influence returns for the foreseeable future.

Nonetheless, with earnings season of Q1 being completed by now, prospects are good as most of the fortune 500 companies managed to beat analyst expectations. A combination of low interest and a relatively weak dollar resulted in a spike in profitability margins for many organizations, which helped drive strong earnings, and therefore good performance on the stock market. Since the United States is currently further down the line of Covid recovery than most European nations (with the exception of the United Kingdom) it could be hoped that a similar scenario would occur there in the upcoming quarter. This would be warmly welcomed as international earnings are expected to be below 4% of compared to last year, while US earnings stand 11% higher.

With the end drawing ever closer, we check to see where we stand with our own investment competition. Still undefeated on top, Merx remains the lone ruler that tops the chart. They have been able to maintain this position with their strong M2 of 2.,80%, but Conquistadores Capital is close on their heels with their M2 of 24.01%. If rising inflation fears result in excess volatility in markets, the entire competition could still shift based on how each groups’ portfolios are balanced. Despite little changes happening in the top 10 of the competition, the lower ranks saw much more movement, as Aevitas managed to climb by 7 positions with their weekly return of 4.11%. The highest return of the week can be attributed to CMG investments, who managed to post an impressive 5.8% weekly return on their portfolio. CFQ was less fortunate and fell down the charts by 6 places after incurring a -1.46% loss over the past week. However, word on the street is that CFQ is concocting some interesting plays to turn fortune into their favor, but seeing that anything could still happen in the last week(s), let the cards fall as they may.

Our second investment competition saw no changes happening in terms of ranking. Das Kapital still remains the Tabellenführer with their M2 of 11,72%. Aurelia with their second position in the charts still has miles of catching up to do, as their M2 of 0,56% pales in comparison. Despite being at the bottom of the league, IValue investments managed to pull in the highest return of 3.47% over the past week. 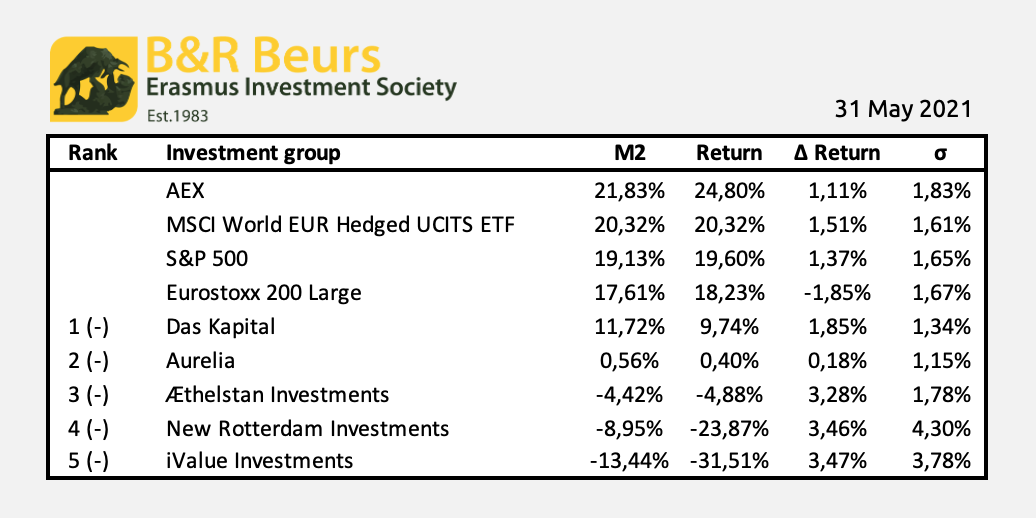