In the last two weeks, European and U.S. equity markets have suffered losses, fortunately, the Christmas spirit blessed this week with impressive returns, primarily led by reassuring news on the Omicron variant. The S&P 500 finished the week 3.82% up, mostly driven by Information technology stocks, with Apple up 10.88% over the week and almost reaching a market capitalization of 3T$. In Europe, markets followed the trend, with the STOXX Europe 600 up 2.76%.

Last Thursday, indebted property developer China Evergrande defaulted for the first time. The struggling company had so far made last minute payments to stay afloat. This was a story that was a long time coming, with Alicia Garcia-Herrero, Chief Economist for Asia Pacific stating: “We should have been calling this a technical default for a long time already, but nobody dared”. Signs that the Evergrande default would disrupt Chinese markets intensified on Monday, with the Hang Seng Mainland Properties index, which tracks 10 of China’s biggest developers, falling as much as 3.6 per cent. In a report that came out this morning it was noted that a third of private equity groups with exposure to China would decrease their investments in the country’s real estate sector over the next three years. Not one investor said they planned to increase their investments.

On Friday, the U.S. Bureau of Labor Statistics released its November report, which indicates the CPI (Consumer Price Index, main inflation indicator) reached 6.8% year-on-year, mainly driven by energy prices, up 33% year-on-year. Excluding food and energy, inflation is still up 4.9%, quite far from the Fed’s 2% target. Such a rate hadn't been reached since June 1982. Yet, markets did not react negatively to the news as numbers matched the forecast.

In Europe, Pfizer and BioNTech shared their laboratory results, indicating that their booster vaccine could be effective against the Omicron variant, allaying some concerns about the possible economic obstacles the strain could cause. Moreover, rumors that the European Central Bank could increase its Asset Purchase Programme once its Emergency purchase Programme ends in March 2022 also impacted the bond markets, pulling the yields downwards. As a reminder, the Euro area annual inflation rate was 4.9% in November, up from 4.1% in October. Germany is the most impacted country with annual inflation of 6%.

This week, the International Monetary Fund called the U.S. Federal Reserve to quickly reduce its bond-buying programme (currently purchasing 120B$ of bonds a month). The board of the reserve meets for two days starting Tuesday, they might decide to accelerate the decrease of the program and/or to raise interest rates.

Correspondingly, the ECB is set to have its Monetary policy meeting on Thursday the 16th, investors should look out for the following announcement, as Christine Lagarde, the bank’s president, could announce changes in the institution’s purchase programme and information on the interest rate increase’s date.

Finally some groups are in the plus!!
Omega investments soared to the first place with a weekly return of 11.13%. Although this was an absolute rocket launch there was still one group who had a quicker rise, De Ruyter Capital corrected their terrible start by climbing 23 places in one week. Last week we commented that it could only go up from here for Conquistadores Capital, many would have believed that it couldn't get any worse but with a weekly loss of 28.97% and a cumulative return of -57.21% it is starting to become quite painful for last year's winners. 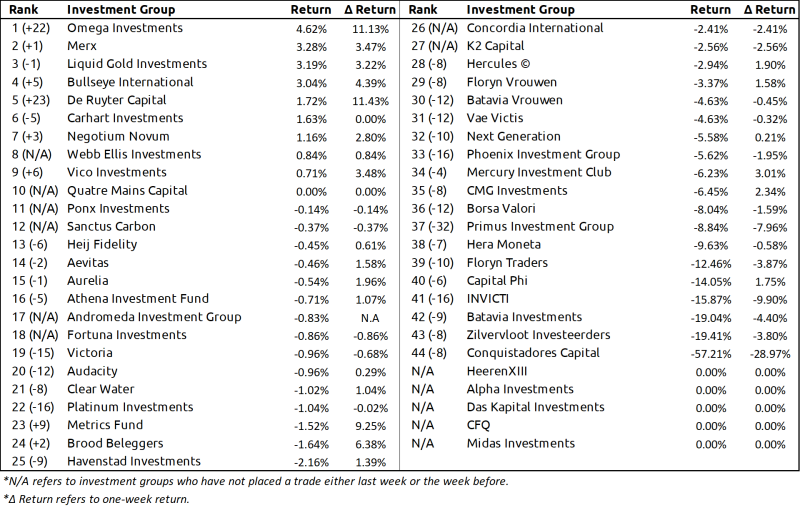