Last week was another week of (mostly) negative returns. The ongoing geopolitical tensions between the US and Russia over the potential attack on Ukraine has been dominating the market for the past weeks. The major indices in the US such as the S&P500, NASDAQ, and Dow Jones Industrial were all down over the past week, with a negative return of 1.44%, 1.60%, and 1.77% respectively. In the EU, returns were slightly better; the Eurostoxx 50 and the FTSE 100 had negative returns of 1.24% and 1.92%. However, the CAC 40 and the DAX were in positive territory, with returns of 2.20% and 0.61%, respectively.

As mentioned before the geopolitical tensions between the US and Russia are having a tight grip on the market. In general, volatility due to geopolitical tensions is short-lived. The average duration is around 6 weeks, of which 3 to reach the bottom and 3 to recover. Nevertheless, as tensions seem to increase rather than decrease, investors should expect increased levels of volatility. This is not only negative for investors as this also leads to new opportunities. As an example, you can look at the price of Brent crude oil which has increased by over $20 since the beginning of December. The increase in the price of oil does not seem to end any time soon as any new headline about the tensions between Russia and the US leads to a new rally in the price per barrel.

Moving on to more general economic news: this week the trade balance data of December (and the CY 2021) came out. The EU did not do well during 2021 as its trade deficit in December was the highest in 13 years. This was mainly due to an increase in energy costs and an increase in imports from China, which rose 53% (!) year-on-year. The EU’s long-running trade surplus was also down significantly as it fell 45% (!) year-on-year. Furthermore, the EU consumer confidence index fell to -8.8 compared to a consensus of -8. This might influence the stocks in the coming week.

Economic data from the US was slightly better than in the EU. Initial jobless claims rose by 23k to 248k for the week. The 4-week average jobless claims on the other hand fell to 243.25k (down 10.5k), making it the second decline in a row. New construction data was also a mixed bag. US Housing Starts fell by 4.1% MoM, due to high levels of inflation and labor shortage, but new permits increased by 0.7%. Furthermore, mortgage rates went up by 4%, which, in theory, will lower real estate prices but increase rents.

With just two weeks left to get your skin in the game the groups didn’t go so well. Perhaps there is some wisdom to ride out this storm and get in a bit later because the results have been rather dreadful. Still mostly outperforming the market in absolute return but still just awful. K2 Capital have had some trouble in this competition but now they have started to run up the mountain they were named after, rising 14 places. There were also some groups that definitely did not outperform the market; Webb Ellis was left bruised, much like if most of you guys would end up in a rugby match against William Webb Ellis. They dropped 7 places to the 27th seat. As I’ve said, just two more weeks to get into the action otherwise you will not be counted as taking part in the competition. 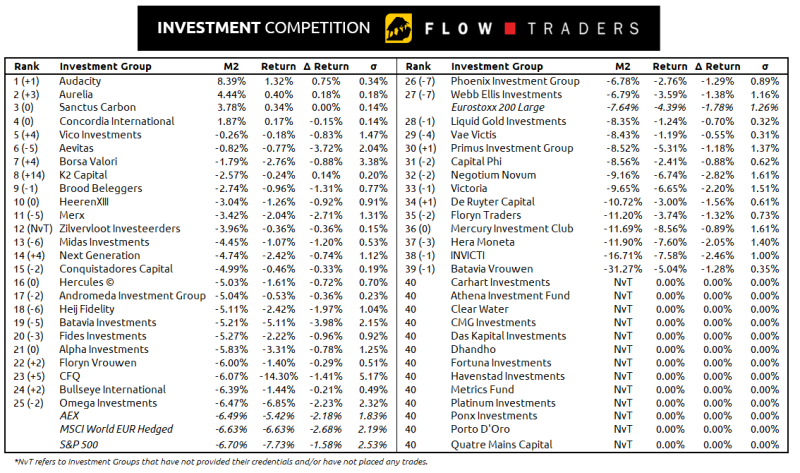