The Olympic flame in Beijing had barely been extinguished, when Russian President Vladimir Putin televised an announcement that set global leaders on edge. The Russian president shared his recognition of the two separatist regions’ independence in Eastern Ukraine. Hours later, Russian military tanks were deployed in Donetsk and Luhansk.

On Thursday, another announcement followed. This time, the Russian president declared a military operation in Ukraine. Russian troops were crossing the border from all angles and there were explosions in various cities, including the Ukrainian capital Kyiv. The Ukraine’s Interior Ministry reported that the invasion had begun. The geopolitical escalation led to chaos in financial markets. On Thursday morning, the major U.S. indices dropped sharply, commodities soared, and oil prices crossed $100, a price that hasn’t been recorded since 2014.

Shortly after, prices were corrected, gold decreased by 2% and the oil price fell back from $100. The global oil benchmark decreased by 1%, to $94.45. Additionally, the European natural gas-prices fell back by more than one-fifth after sky-rocketing on Thursday.

The invasion led to sanctions from the U.S., European Union, Canada and U.K. against Russia. The main sanction is to cut off several Russian banks from the global payment network Swift. By disconnecting Russia from the international finance system, it decreases its ability to operate globally. Ursula von der Leyen, aims to “paralyze Russia’s central bank and “prevent it from deploying its war chest of reserves.” As Europe is dependent on Russia for 40% of its energy, not all Russian banks are excluded to perpetuate transactions. Additionally, a channel for debt payments remains intact due to Russia’s loans from the U.S., Italy and France.

Despite a turbulent Thursday, the stock market improved with news about the sanctions and Moscow’s open stance towards negotiations. The week ended in green for various indices, which was also pushed further by  investors who seized the opportunity to buy the dip. The U.S. indices recovered from the turmoil and The Dow Jones even had its best day since November 2020, with a 2.51% gain. The Nasdaq increased by 1.64% and S&P500 by 2.24%. The yield of the benchmark 10-year U.S Treasury was pushed back to near 2%, as investors sold bonds. Additionally, the Eurostoxx 50 gained 3.38%, as did the FTSE100 with 3.91%. Next to this, the German Dax and AEX-Index gained 3.67% and 2.72% respectively.

The coming week will most likely be extremely volatile, following The Russian president’s response to the sanctions. After publicized debates with the minister of Defense, he commanded on Sunday afternoon that the Russian army must increase its readiness regarding the use of nuclear units.

In this horrid week of war and invasion into a sovereign nation which brought war back to our continent it seems beyond trivial to discuss rankings of an investment competition so we will not and you can see these rankings for yourselves.

We will conclude by incorporating the following link with which you can give money to provide food, water and medical care to the people displaced due to this terrible injustice. 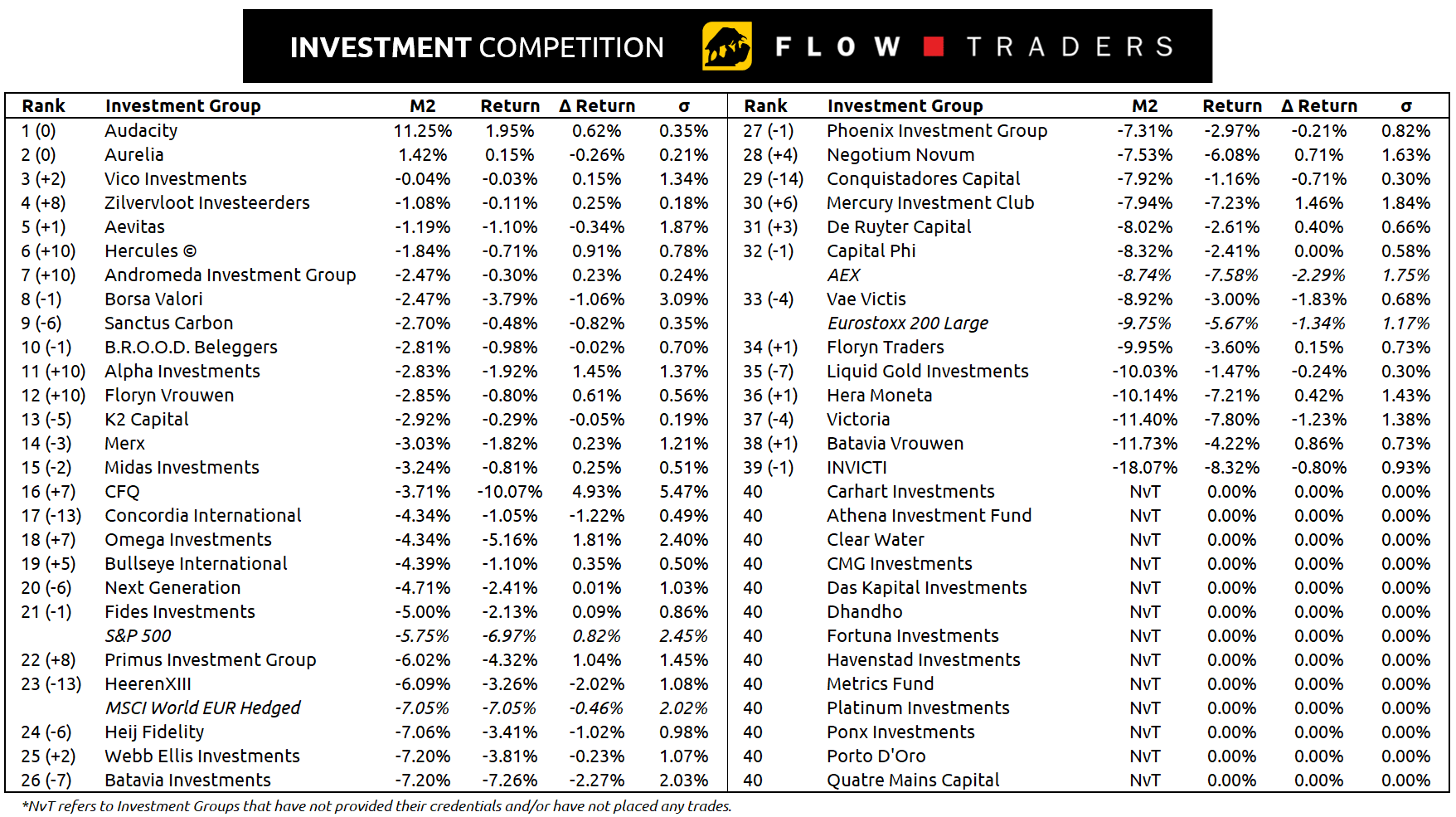