Investors could have predicted that this week would be highly volatile, and they would have been right. While American markets stayed afloat with -1.3% decline in the S&P 500, -1,3% in the Dow Jones and -2.8% in the NASDAQ (bringing the index to -14,9% YTD), European stocks took the biggest hit. As it could also have been expected, the oil barrel price increased impressively, +25,3% over the week, to 114$, a price last seen during the 2008 financial crisis. As the American economy is not as dependent on Russia, financial markets stayed quite stable compared to their European counterparts. Moreover, commodities as a whole increased, especially in agricultural products.

The fact that Russia provides 41% of Europe’s natural gas and 28% of its crude oil, the least we can say is that investors feared for their portfolio (and they were right). The Daxx decreased by 13.4%, Italy’s FTSE MIB took -15,5%, France’s CAC40 bled -12,6% and Netherlands’s AEX shed almost -10% over the week. Moreover, inflation in the eurozone reached 5,8% as food and energy prices increased, from 5,1% in January. However, the ECB focuses on core inflation to make a decision, and it hit 2,8%.

According to Goldman Sachs, the impact on Russia's economy will be worse still, with an expected decline of 7% on its GDP, compared with a growth of 2% before the crisis. While bombing in Ukraine continues to destroy infrasctructure and facilities, and could bring their GDP down by 60%. Russia kept its stock market closed this week, and will keep it that way until Wednesday at the latest, protecting investors from serious losses. The country also raised interest from 10,5% to an impressive 20% to encourage borrowing while the Ruble declined by at least 30% since the start of the war, very high inflation is now expected in the country. As a reminder, Russia suffered from 4 other financial crises since 1998, the biggest being in 1998, when the country defaulted on its debt, leading to a 84% inflation in one year.

Now that every group that wanted to sign in has made a trade we can finally stop looking at new entries. Even though the market isn’t doing wonderfully at the very least, some groups aren’t doing terribly with four groups even posting a positive return. Audacity has been at the top of the leaderboard for some time now which is very impressive. Midas Investments is having a worse go of it with a weekly return of -8.23% and an M2 of -6.11% I think we can safely say that they do not, as of yet, depicted the Midas touch. 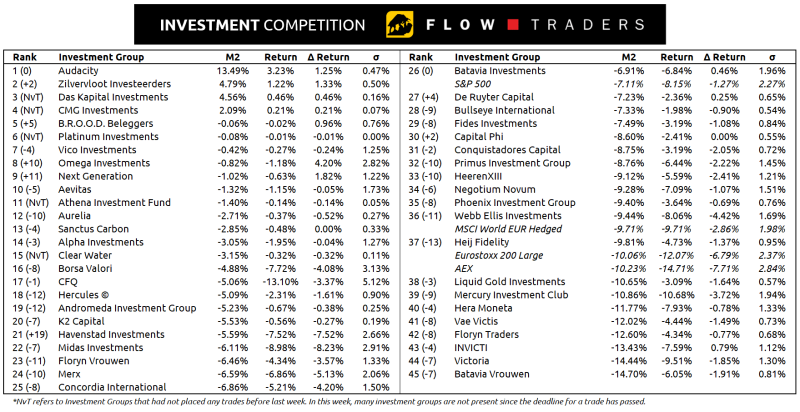