Another week, another equity market slide, driven by extreme volatility provoked by the Russian invasion of Ukraine. By now, some markets officially fell into bear market terrain. For example, the Nasdaq 100 fell 22% below its peak, which is below the 20% bear market threshold. The S&P 500 is 14% off from its all time high, in correction period for now. Consumer staples underperformed last week, as product markets announced that they were suspending their operations in Russia. Also, the week was marked by an extreme high trading volume. On Monday, over 19 billion shares were traded on U.S. markets alone, which is the most since the Gamestop short squeeze in january 2021. In Europe, equitie rebounded somewhat in a volatile week of trading, perhaps reflecting hopes that a diplomatic solution to the Russia-Ukraine conflict might emerge. In local currency terms, the pan-European STOXX Europe Index ended 2.2% higher. Germany’s DAX Index advanced 4.1%, while Italy’s FTSE MIB Index, which dropped briefly into bear market territory earlier in the week, tacked on 2.6%. The UK’s FTSE 100 Index rose 2.41%. Japan’s stock markets lost ground over the week, as uncertainty about the Russia-Ukraine situation continued to dent risk appetite, global commodity prices soared, and many central banks continued to shift toward a more hawkish stance. The Nikkei 225 Index fell 3.17%, and the broader TOPIX Index was down 2.46%. Chinese markets recorded a weekly loss amid a resurgence in COVID-19 outbreaks and the war in Ukraine, which pressured prices for industrial metals and agricultural commodities. The broad, capitalization-weighted Shanghai Composite Index slumped 3.98%, and the blue-chip CSI 300 Index retreated 4.21%.

Surging commodity prices as a result of the Russian-Ukrainian conflict seemed to dominate sentiment during the week. The escalation was most visible to consumers in oil prices, reaching USD 139 per barrel in international markets on Monday amid reports that the Biden administration was weighing a possible embargo of Russian crude oil. On Tuesday, President Joe Biden announced that the U.S. was cutting off all imports of Russian oil and gas and told Americans to be prepared for higher gas prices. European nations, which are much more reliant on Russian energy imports, announced less stringent measures. Turmoil in the market for nickel, a component of stainless steel and other alloys, also seemed to worry investors. Russia’s threat to ban nickel exports—it supplies over 9% of the world’s supply—caused prices to double before trading was halted on the London Metal Exchange. The unprecedented rise threatened the ability of the world’s largest producer, China’s Tsingshan Holding Group, to meet margin calls on its short positions.

Much of the week’s economic data came in roughly in line with expectations. The consumer price index matched market expectations, rising 0.8% in February and 7.9% over the previous 12 months, the most since January 1982. Weekly jobless claims came in slightly above expectations, at 227,000, but remained at low levels. January job openings beat expectations at 11.26 million, as declines in accommodation and food services in the face of the omicron variant of the coronavirus were offset in other areas. Americans remained pessimistic about their financial prospects, however. The University of Michigan’s preliminary gauge of consumer sentiment in March fell more than expected to 59.7, a new decade low. The survey’s chief researcher pointed to inflation worries exacerbated by the Russian invasion of Ukraine as the main factor in the decline.

Another week of worrisome return. However, there are still quite a lot of groups who are doing better than the market. There is no group that is doing worse than the AEX and only a handful who are doing worse than the MSCI World, which is admirable. Some did drop though; concordia dropped from the cliff falling 8 places to the 33rd position. I want to wish a special congratulations to Batavia Vrouwen who, for the first time since the start of the competition, stepped up from the last place. 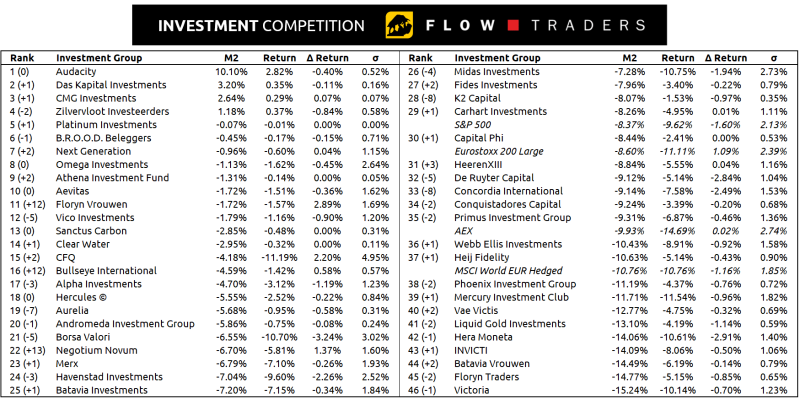