After weeks of low and negative returns, the markets were back with returns we have come accustomed to since the beginning of the pandemic in 2020. During the past week, all markets ended in green, most up more than 5% compared to the week before. In the US the S&P 500 and Nasdaq 100, were up 6.20% and 8.85% respectively. While in Europe the AEX, Eurostoxx 50, CAC 40, and DAX 40 were all up as well with the DAX having the lowest return of the group at 4.24%.

In Asia, markets were a bit more volatile and, on average, had lower returns than their European and American counterparts. The lower returns can partly be explained by the new lockdown in Shenzhen that was announced by China at the beginning of the week. Fortunately, not all news from China was bad this week as the government has stated that it will stabilize the market and support economic growth. The report also stated that it will support companies that are listed overseas and that it would work with foreign regulators. The day that the news came out the stocks of JD.com, Tencent, and Alibaba all rose over 30%. It is important for investors in Chinese stocks to keep an eye on further government statements as it can lead to a lot of short-term volatility.

Moving over to economic news from the US where the Fed decided to hike the interest rates for the first time since 2018. All but one board member voted in favor of a 0.25 bps hike. St. Louis Fed president James Bullard, preferred a 0.50 bps hike. Nevertheless, inflation is expected to continue in the coming months especially given the war in Ukraine and the sanctions imposed on Russia. As for February, consumer inflation expectations increased to 6%, up from 5.8% in January and in line with November and December.

In the UK the Bank of England did the same as the Fed, namely raising the interest rate (from 0.5% to 0.75%). This marked the third increase in just a few months as the BoE raised its interest rates already in December and February. The Bank of England has stated that it expects inflation to be around 8% in the three months through June due to the invasion of Russia.

As for the coming week, investors should pay attention to see if we aren’t dealing with a dead cat bounce (a small recovery in an otherwise bear market). The term dead cat bounce is based on the notion that even a dead cat will bounce if it falls hard and fast enough. Furthermore, it is important to keep an eye on news from the war in Ukraine as any positive news can lead to an increase in certain stocks.

A sunny week is ahead of us. Along with the temperature Phoenix, Primus and Floryn have greatly risen!  By catching up over 20 places, it may be the appropriate time to celebrate this on the terrace. Further, Batavia Vrouwen has risen 17 places and left its male counterpart behind in the dark clouds at the bottom of the list. We will see if the sun will reach them next week. 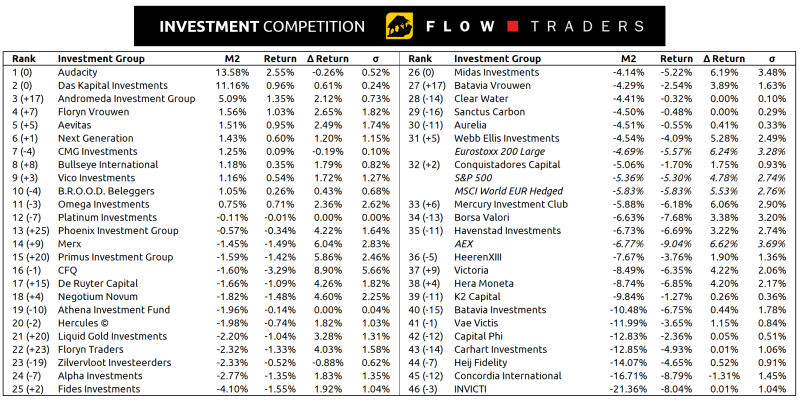