Last week the results were mixed in the markets, the EUROSTOXX 600 increased by 1.06% while the S&P 500 increased by 0.06%, and the DOW decreased by 0.12%. We still see a lot of uncertainties in the markets, making investors more cautious in their investments. In the US, the fear of a persisting inflation causes the market to have a more pessimistic view on the future of the american economy. Hence, the bond market made the 2 years and 10 years bond yield inverse (meaning the 2 year bond now has a larger spot than the 10 year), such events usually announce a recession in the economy. Also, the 5 years and 30 years also inverted, which happened last time in 2006. JPMorgan’s analyst wrote that there was too much negativity in the market compared to the real state of the economy, the inversion of the yield is considered as a negative occurrence when it stays that way for at least a month.

In Europe, the markets were moved by several fears and events, such as fear of the future economic state of the region, with a strong inflation and the ongoing Russian invasion of Ukraine. Russia threatened to stop delivering natural gas to Europe if it did not pay in rubles, this decision aims at supporting the rubles value, which in the last month already appreciated by 34% after a steep decline in the first days of the invasion. Then, economists estimated the eurozone's inflation to reach 7.5% in march, a record. Some countries suffer from a much higher inflation, like Lithuania’s 15.6%, Spain’s 9.6% rate or even the Netherlands' staggering 11.9%. Such rates are mainly led by energy prices, and core inflation is for now still at a reasonable 3%, increasing from february when it was 2.7%. Finally, the ECB announced that if the war in Ukraine was to continue, causing increased political uncertainty, and if the supply of energy remained disrupted, the eurozone could lose one point of growth in 2022, from 3.7% to 2.5%.

China is still battling with a resurgence in cases of Covid-19, Shanghai announced it suffered from 32,000 cases last month, the highest since the first appearance of the virus in Wuhan. Following its zero cases policy, the government announced a lockdown for the whole city. The US added five dual listed companies to the HFCAA, which threatens to delist the Chinese companies from the US if they do not comply with HFCAA’s audit requirement for at least three years.

At this point in the competition I didn’t expect major changes from week to week however I was sorely mistaken as there have been many groups rising 8 places this week and a couple dropping massively as well. Apparently it helps to put an A in front of your name as the entire top three groups possess this “A prefix”. As all of you know however, correlation is not causation but it is strangely noticeable. Among the droppers is Sanctus carbon; they were founded on the basis of diversity and being ESG minded when it comes to investing. Apparently the market is at the moment not even remotely interested in those things as they have dropped a monumental 24 places. 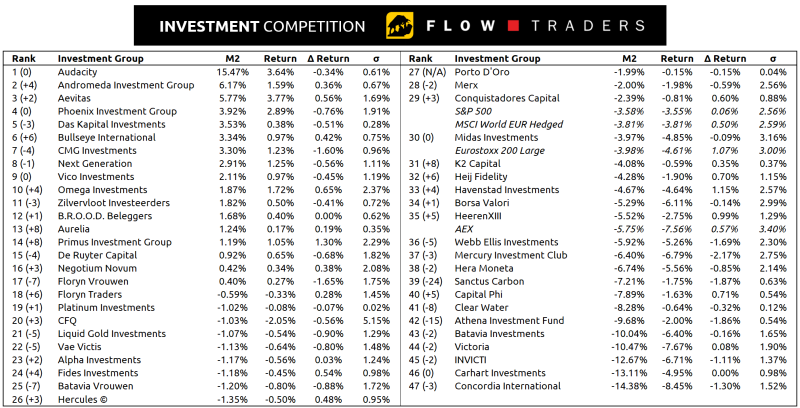