What drove this, in general, negative sentiment last week especially? Federal Reserve policy and the situation in Ukraine continued to loom large over sentiment. Stocks declined Tuesday morning after Fed Governor Brainard promised in a speech that the Fed would start to “reduce [its] balance sheet at a rapid pace as soon as our May meeting.” Later that day, Federal Reserve Bank of Kansas City President George told Bloomberg that there was “no question” that the Fed had to act rapidly to dampen inflation. The minutes of the Fed mid-March policy meeting sent stocks declining further on Wednesday. They revealed that policymakers were prepared to reduce the central bank’s balance sheet by USD 95 billion per month, more than expected. The minutes also showed that the Fed is prepared to raise rates by 50 basis points in May. Futures markets were predicting that the most likely scenario was for the federal funds target range to hit 2.50% to 2.75% by the end of the year—well above its current range of 0.25% to 0.50%.

Likewise, the minutes from the ECB’s March meeting showed that the persistence of high inflation called for immediate steps toward normalizing monetary policy to prevent a wage-price spiral (higher prices lead to higher wages, which in turn leads to higher prices again). Some argued for winding down the central bank’s asset purchase program by the summer and noted that conditions for lifting interest rates had either been met or would soon be met.

Let's now take a look at the economic calendar from last week. The week’s economic calendar was relatively light but suggested that the economy was proving resilient. The U.S. weekly jobless claims, a very important indicator, fell much more than expected to 166,000, the lowest number since 1968. Continuing claims rose unexpectedly, however. The Institute for Supply Management’s (ISM) gauge of service sector activity came in slightly below consensus expectations but still indicated robust expansion. In Europe, investor sentiment in the eurozone fell to its lowest level in nearly two years in April, according to the German Sentix survey. German factory orders fell sharply in February, driven mainly by a decline in foreign orders. It was the first drop in orders after three consecutive months of gains. In China, the Caixin Services PMI sank to 42 in March from 50.2 in February, its lowest level since the pandemic started, reflecting the latest outbreak’s toll on consumer demand. In response to recent weak economic data, expectations are mounting that the People’s Bank of China will reduce the reserve requirement ratio, or the amount of money that domestic banks must hold in reserves, in the near term.

With King day coming up in a couple of weeks, let us look at the kings and queens of our competition: The King of the virtual competition -Heij Fidelity- has finally come to play, rising 20 places to the 12th position, let's see whether they can come back from behind to get near to or even grab the crown. Let us also discuss one quite embarrassing phenomenon in the department of her royal highness; Victoria. Just imagine being top of the table just 3 years ago and being stone dead last now with not only the lowest M2 but the lowest return as well, losing over 10% of your portfolio’s worth. Let’s just say we’re not living in Victorian times. 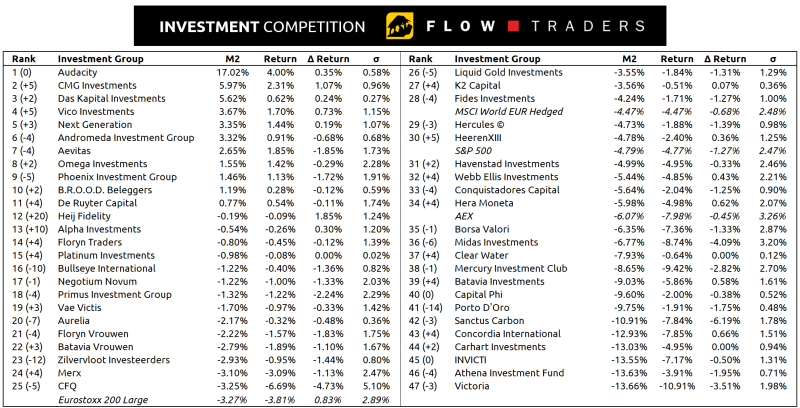