In light of the Federal Reserve’s interest rate hikes, shifting consumer demands throughout the pandemic and volatility, the markets were colored blood red on Friday.
For U.S. stocks, the DJIA had the worst day of the year, closing with a 2.82% loss. The Nasdaq closed at -2.55% and the S&P500 had its third, straight losing week, marking a 2.77% loss.

In the close, stocks were selling off rapidly. The market responded with a seemingly knee jerk reaction to news from the Fed, despite predictions that interest rates would increase. To clarify, policymakers expected that by the year’s end, the target federal funds rate would increase by 1.9%. At this pace, the overnight federal funds rate is expected to increase between 2.75% and 3%. The predictions are based on the current level of inflation, which is three times as high as the Fed’s 2% target. Consequently, Chairman Jerome H. Powell announced last week that a 50-basis point hike is on the table for May. The news confirmed expectations of an increased hawkish stance.

Across the Atlantic, the markets were also crimson. The UK FTSE 100 lost -1.39%, Germany DAX -2.48%. AEX -1.62% and Stoxx Europe 600 -1.79%. In Europe, inflation hit 7.5% last month, nearly four times the European Central Bank’s target of 2%. Speculations swirl that the ECB plans to end its net asset purchases in July or August, in combination with rising interest rates towards the end of the year. The speculations stemmed from the ECB’s aim to resolve skyrocketing inflation rates. Additionally, the discussions about terminating net asset purchases is essential to hiking rates. Furthermore, the French population re-elected President Emmanuel Macron, marking a second term. Meanwhile, the war in Ukraine continues to rage. Ukrainian forces were successful in their defense as they retook areas around Kyiv and the Russians withdrew. However, Russia has perpetually been increasing its troops in the Donbas region, as they aim to -in their minds- completely liberate the Donbas (Ukraine’s eastern regions).

As Shanghai entered its fourth week of a severe lock-down, the Chinese capital continues to mandate its zero tolerance policy for Covid outbreaks in other cities. In Beijing, three rounds of mass testing were authorized in a district that is the base for international organizations. The Shanghai composite managed to close with 0.23% gain. The Hang Seng lost 0.21%, as did the Nikkei 225 with 1.63% loss.

What a week it has been; only two groups that have gone in the green and the markets haven’t fared any better. The only real riser this week was Aurelia, jumping 11 places to grab the 11th place. I wonder where they got their name from as the only finance related Aurelia I’m aware of is Aurelia Finance; a Swiss private bank that was associated with the Bernie Madoff Ponzi Scheme. Let's give them the benefit of the doubt and assume that they do not find this to be an admirable company to name your investment group after. Platinum investments were the biggest droppers this week. They don’t seem to be aptly named seeing as -ranking 38th- they haven’t exactly been worth their weight in platinum. 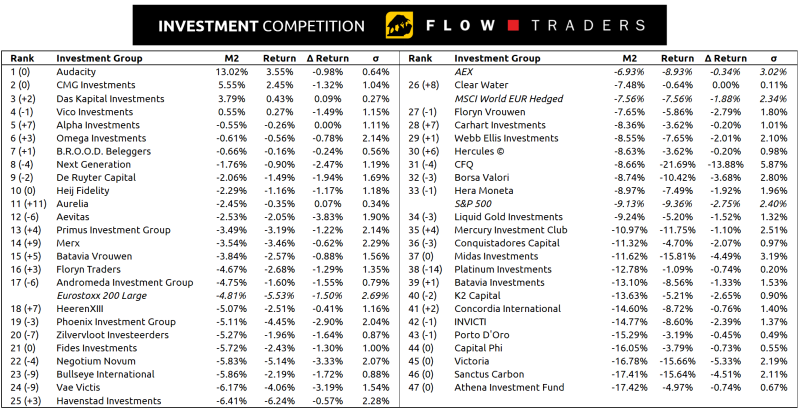