Again, a very grim update of the markets this week. Almost all major indices sled downwards this week. This is particularly visible in the US where over the year 2022, the Dow jones is down 9.25%, the S&P500 13,3% and the Nasdaq 21.16%, it is the worst start of a year since 1939. What caused such a panic in the markets? Well first, a pessimistic outlook on the economic landscape, with US’GDP down 1.4% (inflation-adjusted) on the first quarter of the year. Moreover, additional pressure to raise interest rate is being pushed through, with expectations of 0.5% raises in May and June, and talks of 0.75% raises at some point in the year. Finally, the FED is likely to confirm the start of its much-expected quantitative tightening (process through which it reduces its balance sheet by selling the bonds it had purchased previously). To this we can also add the supply-chain issues which are rising, especially with China’s lockdown of its main economic hubs.

All the main tech companies announced earnings this week, results were mixed. Especially Amazon, which missed its expectation, which investors sanctioned by lowering the stock by almost 14% over the week.

In Europe, indices were more balanced, with the STOXX Europe 600 ending the week down 0.64%, the DAXX 0.31%, the CAC40 0.72%. Europe is preparing its sixth sanction package against Russia; it will contain sanctions against Russia’s oil revenue. While Gazprom (Russian gas company) said it will stop gas supply in Poland and Bulgaria after the countries said they will not pay for it in rubles. Putin announced that four European countries already made payment in rubles and that ten opened accounts in the currency. Eurozone consumer price inflation (CPI, the inflation indicator) rose to 7.5% year on year, yet another record.

This week Investors should be watching the FOMC meeting on May the 4th as there it will be decided whether or not there will be an increase in interest rate and if so by how much.

This is a week of paying respect to the fallen, remembrance of the victims and the celebration of liberty. We hope you will partake in this trio of very important practises of retrospectivity.
On to the competition: Let us look at the groups who have examined the M2 in the beginning of the competition and sought not to just go for the biggest return but actually try to play the competition. In other words: let's look at groups who know what they are doing and groups that haven’t the faintest clue.
CFQ has risen 11 places to the 20th place. They have an M2 of -8,26% which makes them part of the peloton but with an absolute return of -20,47% -which is the worst in the field- they are not even hanging on in the race. So; they understand the M2 but don't seem to know how to make money.
There are also groups that have apparently purposely chosen not to understand the M2. Platinum Investments have dropped 3 places to the 41st place with an M2 of -16,68%. In the competition that makes them among the absolute worst but when you look at their total return of -1,67%, sadly they are among the leaders in the race. So; they don’t understand the M2 but do seem to be more aware of how to make money. 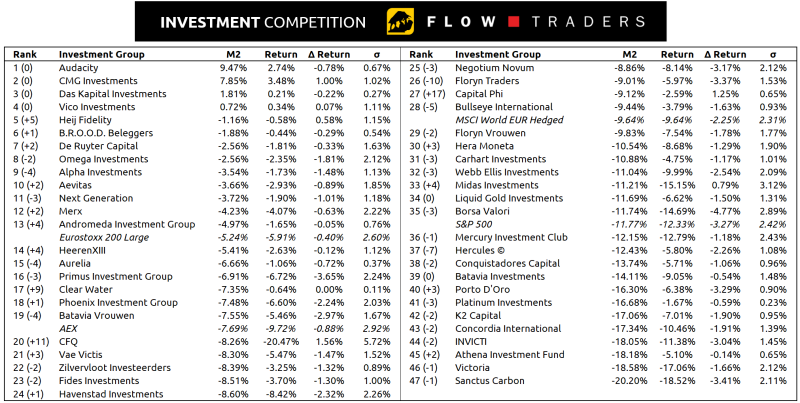