Sell In May, Come Back In September? | Flow Traders Investment Competition | Week 17

Major benchmarks experienced their fifth consecutive week of losses as interest rate and inflation tensions continued to deteriorate sentiment. Growth stocks had to suffer especially. These losses pushed the Dow Jones officially into a correction territory, down more than 10% from its recent high. The Nasdaq 100 and Russell 2000 ended the week into bear markets, down more than 25%. Stocks in Europe also tumbled due to fear that central banks have to control inflation, potentially increasing the risk to economic growth. Lockdowns in China and the war in Ukraine added to the uncertainty. The EuroStoxx 600 dropped by 4.55% last week, the CAC 40 in France dropped by 4.22%, Germany’s DAX fell by 3.00%, and Italy’s FTSE MIB Index lost 3.20%. The UK’s FTSE 100 Index slid 2.08%. Japanese equities rose slightly: the Nikkei 225 Index increased by 0.58%, and the broader TOPIX Index was up 0.86%. In China, markets fell as Beijing showed no sign of relaxing its zero-tolerance approach to the coronavirus, raising worries about the economic cost of widespread lockdowns. The Shanghai Composite Index fell 1.5%, and the CSI 300 Index, which consists of the largest listed companies in Shanghai and Shenzhen, sank by 2.7%.

What was driving the market volatility last week? Traders had been preparing for a week of high volatility given the Federal Reserve’s highly anticipated policy meeting on Tuesday and Wednesday, along with several important economic data releases. On Wednesday afternoon, Fed policymakers announced a 50-basis-point increase in the federal funds target rate, the largest since 2000, to a range of 0.75% to 1.00%. Officials also announced that the Fed would begin allowing its holdings of Treasuries and other securities to decline in June at an initial combined monthly pace of USD 47.5 billion, stepping up over three months to USD 95 billion. The market’s initial reaction was calm, as the moves were largely in line with expectations. At his post-meeting press conference, however, Fed Chair Powell surprised many by stating that a hike of 75 basis points was “not something we are actively considering.” Together with his assurances that a recession was unlikely in the near term, his comments were generally perceived as more dovish than anticipated. Equity indexes rallied sharply in late Wednesday trading.

However, on Thursday,  investors appeared to reconsider whether a 75-basis-point increase was in fact off the table—and would be confirmed as an ongoing possibility by other Fed officials scheduled to speak the next day. Some potentially worrisome inflation data probably reinforced such concerns. Nonfarm unit labor costs jumped 11.6% in the first quarter, well above elevated consensus forecasts of a rise of around 9.9%. The increase was largely due to a 7.5% drop in productivity. While many economists cautioned that the figure was complicated by the surprise 1.4% annualized decline in first-quarter gross domestic product, it was still a greater drop than most had expected. Investors also negatively reacted to the non-farm payrolls report, on Friday. Employers added 428,000 jobs in April, modestly above consensus expectations of around 390,000, but previous months’ gains were revised lower by nearly the same gap. Payrolls firm ADP’s of private sector employment, released Wednesday, surprised to the downside, so investors may have been hoping for confirmation in the official data of some easing in labor market pressures. Average hourly earnings  rose 0.3% in April, down from 0.5% in March and below expectations.

In Europe, policymakers appeared to press for an early increase in interest rates after the end of the quantitative easing program sometime in the third quarter. Multiple authorities hinted that they would vote for a rate hike as early as July. German manufacturing orders fell by 4.7% in March, driven by lower foreign orders. Industrial production dropped 3.9%, the largest decline since the start of the coronavirus pandemic. The statistics office attributed the decline to supply chain disruptions due to pandemic restrictions and Russia’s invasion of Ukraine. Meanwhile, EU retail sales volumes slipped 0.4% on the month, with mail order and internet sales recording the biggest falls. Economic data in Japan shows that the core consumer price index rose 1.9% year on year in April. The BoJ recently raised its outlook for inflation, citing the impact of a significant rise in energy prices, although it said that the increase is likely to be temporary. In China, service sector activity shrank in April according to the latest Caixin services Purchasing Managers’ Index (PMI). The drop in the private Caixin survey was consistent with the official PMI, which fell in April as lockdowns curbed production and disrupted supply chains.

With the biggest song contest in the world -Eurovision- fast approaching we will look at which investment group will get Douze Points and which IG will not even make it through to the final:
Much like Sweden with their horrid kitsch music style Audacity seems to be the favourite with the bookmakers with an M2 of 10.09% and currently ranking 1st in the competition.
Like Ireland who was very successful back in the day but hasn’t been in the recent past; Victoria is not at all likely to make it past the semi finals placing 46th with an M2 of -20.75%.Every year there is also a contestant that is given the auspicious title of Wild Horse. This year this title is granted, by the bookmakers, to the oddly named Investment group of Das Kapital, ranking 3rd with an M2 of 3.26%. 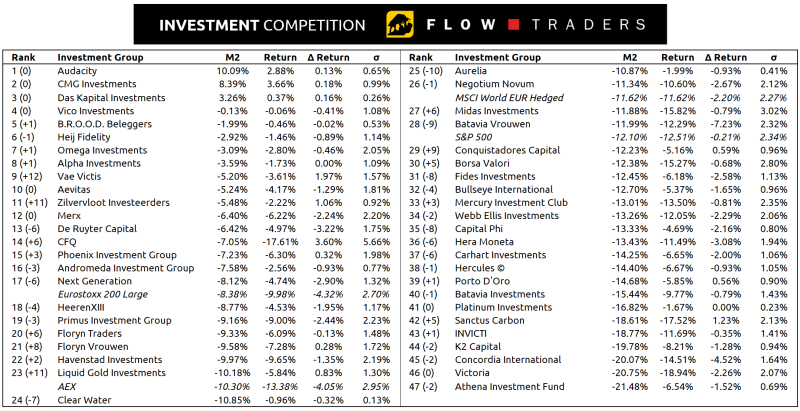