Another week of negative returns in most major stock indices this week. In the US the S&P500, Dow Jones Industrial, and the Nasdaq 100 were all down this week but showed some signs of recovery on Friday. This keeps the US market out of bear market territory this year, as a bear market is defined as a period in which stocks fell over 20 percent (after last week the S&P500 is at -16%).

In Europe, stocks looked a bit better as the AEX, the CAC 40, DAX 40, and the FTSE 100 were all up, with the DAX being up the most at 2.96% this week. One potential reason for this is that investing in US equities is becoming less interesting for foreign investors due to the strong appreciation of the USD against the Euro. This means that US equities are currently a lot more expensive than they were a year ago. Nevertheless, dividends paid out in USD will be significantly higher this year compared to last year and thus would have a positive effect on total returns.

There are multiple reasons why the US Dollar has appreciated significantly since last year. First of all, due to the hike rates by the Fed, it makes more sense for people to exchange currency for the US Dollar. As an example, European investors could exchange their Euros for US Dollars and then deposit their dollars in a US bank to get a higher interest rate. Investors that like to take more risk could also borrow money in a region with a low-interest environment (in this case Europe) and exchange it for a currency of a country with a higher interest rate (in this case the US). Secondly, the rising oil price also increases the demand for US Dollars as most oil trades are settled in US Dollars. The dollars earned in the oil trade are sometimes also referred to as Petrodollars.

From that perspective, it might be good to note that Jerome Powell, head of the Fed, has been re-elected on Thursday. After his re-election, he said that new big rate hikes are currently off the table. This makes stocks more interesting for investors and might make the US Dollar less interesting for FOREX investors.

This week we start our biggest event of the year, being the IW&S. The symposium which is set to get going this evening is always a great ordeal to produce and a great pleasure to be at so be sure to come by and see the spectacle. In the competition we have not been looking at a great pleasure. There were a mere 7 groups who garnered a positive return this week and other than capital phi no real risers. The lead that audacity had is slimming by the week so we are in for an interesting close of the competition, stay tuned! 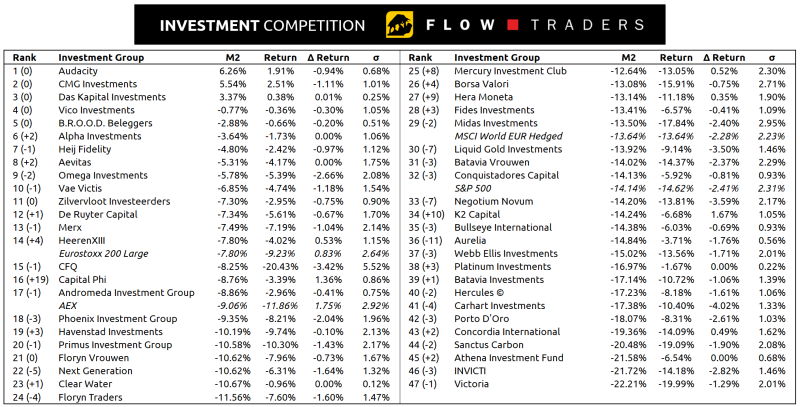