Light At The End Of The Tunnel? | Flow Traders Investment Competition | Week 19

As investors have added inflation to their pandemic concerns, apprehension around faltering economic growth has also begun. Since the beginning of this week, all three major US indexes have lost around 2.9%. Friday marked the end of a week full of stock selloffs, with a day of turbulent intra-day trading. The Dow Jones Industrial Average and S&P500 managed to close the week with daily gains, but just barely. The DJIA was up 0.3% and S&P500 gained 0.1%. The Nasdaq Composite however, fell by 0.3%.

The slight gains at closing time do not suggest that there is light at the end of the tunnel. The Fed has been unsuccessful in convincing investors that its tightening monetary policy will not prompt an economic downturn and it is expected that the market is far from stabilizing any time soon. Moreover, investors remain cautious about the impact of China’s zero-COVID policy on supply chains and the war in Ukraine. The rising concerns are reflected in the S&P500’s performance this year. It has decreased by 19% since January, putting it close to the 20% decline that indicates the end of the bull market that started in March 2020.

The disappointing earnings season from seemingly safe haven stocks (consumer staples) led to enhanced interest in government bonds. Consequently, the yields on the benchmark 10-year US Treasury note fell from 2.854% on Thursday to 2.785% on Friday.

European markets finished higher on Friday as well. After losing throughout the week, on friday Stoxx Europe 600 gained 0.73%, Germany’s DAX Index gain 0.72% and AEX-Index gained 0.68%. The FTSE100 gained 1.19% and the gains follow the U.K. retail sales, which turned out better than expected in otherwise negative times.

In China, the central bank did the complete opposite of what the Fed and ECB are discussing. In an attempt to support the economy amid lockdowns and reach its expected growth percentage of 5.5%, the People’s Bank of China reduced the benchmark rate for five-year loans from 4.6% to 4.45%. China's Shanghai Composite Index climbed 1.6%, and Hong Kong's Hang Seng Index increased 3%.

This is the week of charity. This Thursday we have the much anticipated drink with Unicef where we will auction off a couple of items for charity and at this auction, for every drink you buy money will go to charity, so drink up!
When it comes to the competition we see that the holy Ascension day has come early for Concordia International, they rose 36 places this week which can only be described as just as unlikely as a person rising to the heavens.
Conquistadores Capital has also finally risen again. Now coming extremely close to the left row, this could entail light at the end of the tunnel but as Hans Teeuwen says, that light might very well be a train coming towards you. 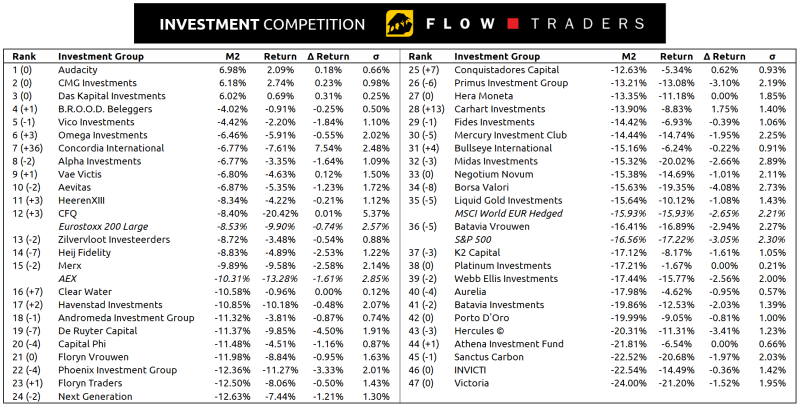