The end of a bear market? As business newspapers were just starting to write about the bear market indices had supposedly entered, the S&P500 surged by nearly 7%! An unexpected but very encouraging news. Even when the Fed announced it was open to two rate hikes of 50 points in both June and July, indices did not fall. Currently, markets are pricing a Fed policy rate of 2.77% in February 2023. Still in the US, the Dow was up 6.24%, breaking an eight-weeks losing streak, the Nasdaq finished the week up 6.84%. These were the sharpest inclines since November 2020.

Some news that played a role in the rally were the reopening of Shanghai, whose lockdown was starting to weigh on the world supply chain, or the possibility that U.S. inflation passed its peak. Indeed the inflation year over year was 6.3% in April, slowing down from 6.6% in March.

Europe also had a positive week, with the STOXX Europe 600 up 2.94% over the week, France’s CAC40 up 3.67, Germany’s Daxx up 3.44% and England’s FTSE 100 up 2.65%. Christine Lagarde, president of the ECB announced that the European bond buying program would end very early in the third quarter of the year, while rates would be raised to positive numbers before year-end. This week, she also appeared in the Dutch TV program College Tour, if you wish to watch it: https://www.npo3.nl/college-tour/22-05-2022/KN_1729332

Volumes were quite low due to the holidays so we can expect a much more volatile week coming ahead. Inflation data in the Eurozone is due tomorrow and China's production index is also published this week. Investors are afraid that the COVID restrictions imposed in some states have been too harsh.

I apologize for the late entry of the ICU on the website this week. The only excuse I have is the great company on the city trip and the Portuguese sun.
On to the Competition; It has been a week of changes, that much is clear. Concordia had a reverse V for performance. Last week they were the biggest riser to now being the biggest let down, dropping 18 places. Together with K2 they were the only group who were in the red this week which is quite an accomplishment seeing as the benchmark rose 5.33% week over week, impressive. We also had a couple of big risers; Sanctus Carbon rose 18 places with a weekly return of 10.40%, Next Generation rose 14 places as well, climbing to the 10th place, quite a feat. It is beginning to become cramp at the top as well with Das Kapital and CMG Investments coming dangerously close to the previously thought untouchable first place of Audacity. Just a month to go so start preparing for the last sprint! 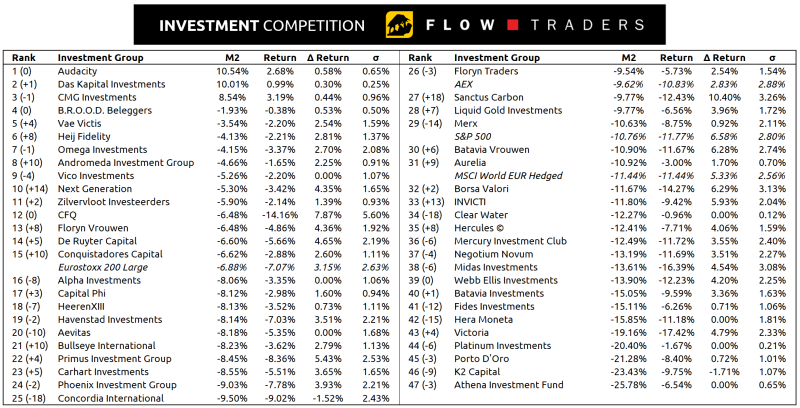