Stocks surrendered a portion of last week’s gains as investors questioned whether the FED will be able to control inflation without causing a recession. Industrials shares outperformed, helped by a rise in Boeing. Consumer discretionary shares also proved resilient, boosted by gains in Amazon.com. Despite the signs of slowing inflation and speculation about a possible Fed pause, U.S. Treasury yields increased substantially during the week, with the benchmark 10-year U.S. Treasury note yield rose from 2.74% the previous Friday to roughly 2.96%. In Europe, shares fell since investors continued to struggle with concerns about elevated inflation, slowing economic growth, the pace of central bank policy tightening, and the invasion of Ukraine.

The Europe 600 Index ended the week 0.88% lower. Major indexes were generally weaker. Germany’s DAX Index was little changed, CAC 40 fell 0.48%, and FTSE MIB lost 1.90%. The FTSE 100 Index dropped 0.69% through Wednesday. In Japan, stocks ended higher, with the Nikkei 225 Index gaining 3.66% and the broader TOPIX Index up 2.43%. A further relaxation of Japan’s strict border controls and Chinese authorities’ decision to allow segments of the economy to reopen following stringent coronavirus lockdowns supported sentiment. Also Chinese stocks rallied in a holiday-shortened week after Beijing unveiled a raft of support measures to cushion an economic slowdown triggered by the country’s zero-tolerance approach to the coronavirus. The broad, cap-weighted Shanghai Composite Index rose roughly 2.1%, and the blue-chip CSI 300 Index, which tracks the largest listed companies in Shanghai and Shenzhen, climbed 2.2%.

Volatility continued to moderate since its recent peak in mid-May, although noted JPMorgan Chase CEO Jamie Dimon warned that an economic “hurricane” was coming because of rising interest rates and elevated commodity prices that seemed to unnerve some investors on Wednesday.  Elon Musk, on Friday, had emailed fellow executives that Tesla might have to lay off 10% of its workforce—and that he had a “super bad feeling” about the global economy—also seemed to unsettle investors somewhat. Markets were closed Monday in observance of Memorial Day.

However, last week’s economic data did little to support worries of an impending recession—particularly one driven by layoffs. On Friday, the Labor Department reported that employers added 390,000 nonfarm jobs in May, well above consensus expectations of around 320,000. Weekly jobless claims, reported the day before, surprised modestly on the downside, while April job openings remained slightly below record highs at 11.4 million.

On the other hand, the Conference Board’s index of consumer confidence fell in May as workers grew somewhat less enthusiastic about their job prospects, with modestly more Americans saying that jobs were “hard to get.”.  The rest of the data suggested continued solid economic expansion. The Institute for Supply Management’s (ISM’s) gauge of services sector activity fell more than expected and hit its lowest level in over a year, although it remained well in expansion territory. The ISM’s manufacturing data showed a surprising acceleration in manufacturing activity in May, driven by new orders.

In Europe,  Chief Economist Philip Lane (ECB) suggested policymakers could back an end to the asset purchase program early Q3, followed by a series of gradual 25-basis-point interest rate increases starting in July. He added: “What we see today is that it is appropriate to move out of negative rates by the end of the third quarter and that the process should be gradual.” Many policymakers are now agreed on the need to start raising rates to curb inflation, but they are divided over the pace of tightening, with some calling for an increase of 50 basis points in July. The ECB’s key deposit rate is -0.5% and has been negative since 2014. Inflation in the 19 countries comprising the euro area accelerated more than expected in May to another record high of 8.1% and spread more broadly across the economy, the Eurostat data agency reported.

This is an update on Pentecost. In a small personal survey I came to the conclusion that almost nobody knows what happened on Pentecost and why they are free from their daily rituals. In this ever lessening christian nation this day has become about as christian as Easter. For those who still don’t know, Pentecost is the day when we reminisce on the “holy” spirit coming back to earth on the apostles of Jesus and the start of the christian church. So let's have a look at who had the holy spirit in this past week and who had to see that spirit fly by and miss them: Aurelia, with a rise of 12 places they have stormed their way into the left row and might very well be one of the recipients of said spirit. Andromeda dropped 9 places this week, Andromeda is a star sign and their investments have proven to be about as useless as the astrologists’ who believe in them. 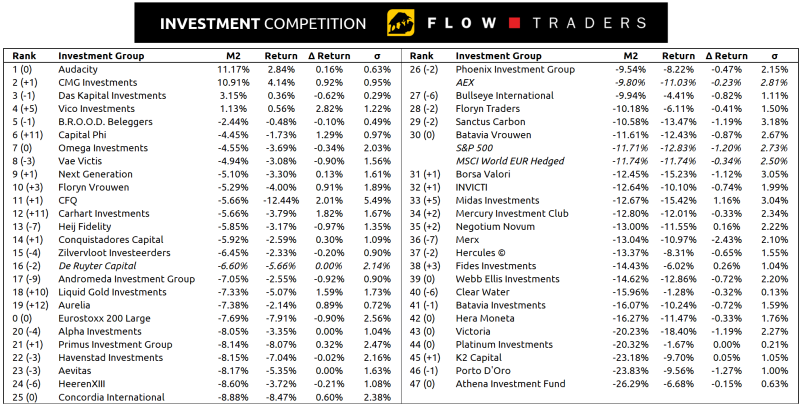