The dead cat bounce ended this week for most major indices (for people who don’t remember, a dead cat bounce is a temporary recovery in the stock market). After weeks of relatively positive returns market indexes crashed at the end of the week. The S&P 500, Nasdaq 100 were down over 5% and the DJI performed slightly better with a return of -4.96%. This brings the S&P 500 close to a bear market again (-18.7% YTD), while the NASDAQ has been in a bear market for a few weeks now (-28.3% YTD).

The negative returns of the European indices can be explained by the news that the European Central Bank (ECB) is planning to raise its rates for the first time in 11 (!) years. In July the ECB is planning to raise the rates by 25 basis points, with further increases expected. Furthermore, it will end its bond-buying QE program on the 1st of July.

In the US the consumer price index rose by 8.6% in May, which was the highest since 1981, mainly driven by the increase in fuel prices (up 106.7% compared to 2021). Economists had forecasted CPI to be 8.3%, which makes it more likely that the Fed will announce another 50 basis points rate hike during the upcoming Federal Open Market Committee (FOMC) meeting that lasts from the 14th to 15th of June.

Last but not least, on Friday the 17th of June, it is triple witching. Triple witching is the simultaneous expiration of stock options, stock index futures, and stock index options contracts. During triple witching days, especially during the last hour, there is increased volume in the market as traders close, roll-out, or offset their expiring positions.

The Festival season has started! The particular genre of music that is often associated with controversy among older generations and the festival season is electronic music: some people disapprove or absolutely dislike this type of music. As I heard one person say; “this isn’t music these are sounds”. Let's look at who will go into the festival season with a smile on their face and who will be the disgruntled older people sitting on the couch watching the world pass them by.
We have a new frontrunner! CMG has taken the lead and surpassed the seemingly unbeaten Audacity. Even though they have been surpassed, both groups are very much still in the race and can go into said festival season with their heads held high. Porto D’Oro however will be sitting on the couch and looking grumpy at all other groups as they have dropped another place and are currently ranked last in the competition with an frankly embarrassing M2 of -28.44%. Just another two weeks until the finalization of the competition! 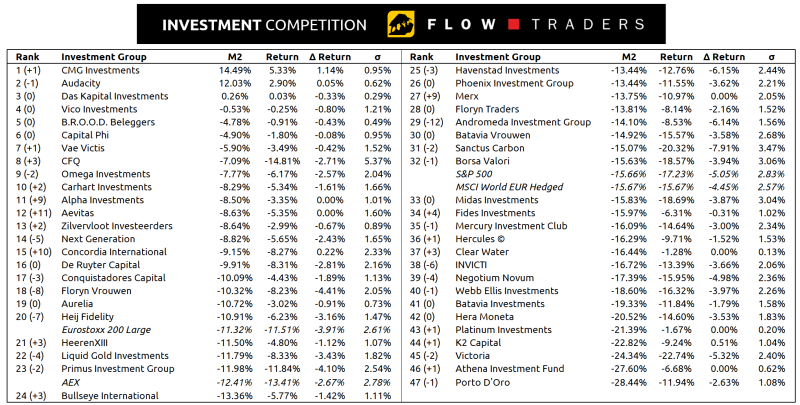