The talk of the town are the inflation rates and what central banks are going to do about it. On June 15th, the Federal Reserve concluded its Federal Open Market Committee (FOMC) meeting. It approved an increase of 0.75-percentage point rate, marking the highest interest rate increase since 1994. The result raised the Fed’s benchmark federal-funds rate to a range of 1.5%-1.75%. The reason behind the steep rise are high energy prices, which drove the consumer-price index to 8.6% in May, according to the Labor Department. Additionally, Russia’s war against Ukraine continues to cause rising fuel prices and perpetual supply disruptions. The news also resulted in one of the worst weeks for Bitcoin, as it dropped below the $19,000 range.

In Europe, some indices seemed to have recovered from the ECB’s announcement of raising rates, while others haven’t. On Friday, the FTSE 100 and AEX lost 0.41%. However, the Euro Stoxx managed to close in green. It closed with a 0.45% gain, as the Stoxx Europe 600. It gained slightly under 0.1%. as the Germany DAX gained 0.67%.

In contrast, the Bank of Japan confirmed its stance that it won’t follow the Fed or ECB’s change in monetary policies. It continues to maintain low interest rates. Consequently, the Japan’s Nikkei 225 fell 1.8%, as further drops in the yen are forecasted. Furthermore, the Shanghai composite gained 0.97% and Hong Kong’ Hang Seng lost -3.35%.

Last week there was a mistake in the article. I said that the competition will end in two weeks but this was incorrect. The competition will end on the 8th of july
We do have quite a special week ahead of us because in this week we have the international day of world peace AND the international day of tall people, both equally worthwhile causes to pin a day to I imagine.
But to the competition; After this week we will no longer relinquish the information of the position of the groups that are in the top three as well as their M2, return, weekly return or standard deviation.
For now that top 3, as well as the bottom three, seems unchallenged but Concordia is steaming ahead, climbing 11 places to get a grip on the top 3. There are also a couple of groups seeming to be very eager to get into the bottom three. This triple of groups -being Web Ellis, Batavia and Hera Moneta- have had a weekly return of below 4% and seem to have their sight on the honorable last place which is currently occupied by Porto D’Oro.

As a final note; please also make sure not to change your password without letting us know because you will be left out of the competition results and you will have no clue where you’re ranked.
For the competition it is T-Minus 3 weeks 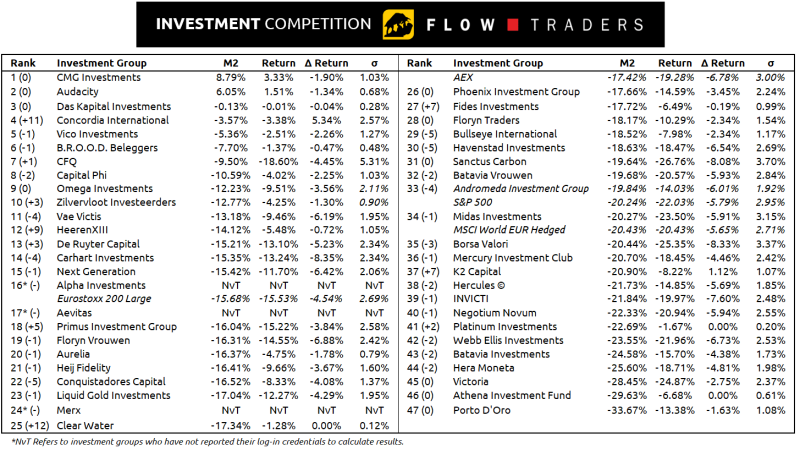