Last week was a quiet but positive period, the S&P500 finished up 6.4%, after being down 6% the previous week. In Europe, the CAC40 was up 3.24%, the DAX 1.52%, and the AEX 2.94%. Amidst this upward movement in capital markets, investors are still very much worried about the future economic outlook. Citibank announced that there is a 50% chance that the US will go into recession,  even Jerome Powel, chair of the FED, said that the rate hikes might through the economy into recession, and that a soft landing (successfully lowering inflation through rate hikes without hurting the economy too much) was going to be very difficult to attain.

Several countries in Europe, including the Netherlands, Austria and Germany, launched plans to reduce gas consumption and increase storage levels, as well as restarting some coal plants to increase electricity consumption.

In China, President Xi JinPing pledged to support more the economy and minimize the impact of Covid-19, this comes at a time when foreign investors become worried of the impact of the zero-covid policy that China maintained until now, with more than 20% of European companies considering to shift their current or upcoming investments in the country.

Next week, the ECB will hold a three day meeting in SIntra, where the Chair of the FED and the governor of the Bank of England will be present to talk about how to curb inflation while keeping economies afloat. Also, the number for the US inflation will be published on Tuesday and for eurozone inflation on Friday.

Besides the competition there is something else that is coming to an end; Pride month. It has become a seasonal occurrence, much like the leaves turning in colour in the fall so will the colours of the well meaning companies from rainbow to regular. For the people wondering why we didn’t change our logo; we aren’t open for a month, we are open throughout the year.
To look at the competition there are some groups that can finalize the month in pride and some in shame. One group that had a prideful month is Floryn Traders; they rose 15 places to a respectable 13th place. One group that has no business feeling pride for anything is Vae Victis, dropping 18 places to fall lower than the terribly performing benchmark. They, as well as some other groups that have performed abysmally, hang your head in shame and hope that the finalization of the competition will garner a little bit of respect and you can once more regain and deserve your pride. 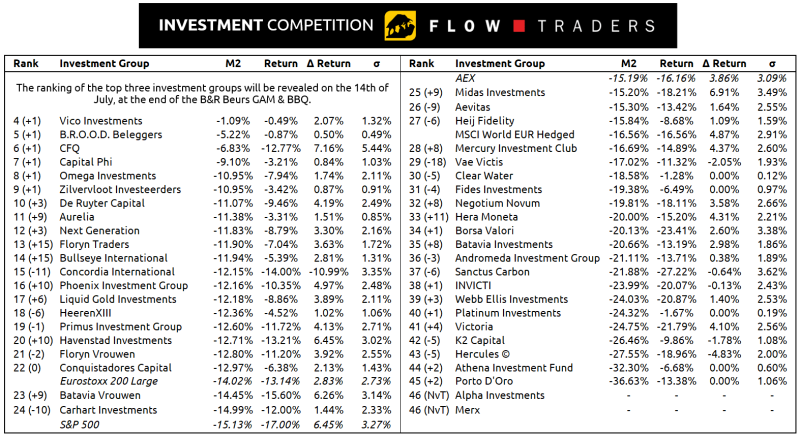