Most of the major indexes had to surrender their previous week’s strong gains, since there are rising worries that the FED’s battle against inflation would push the economy into recession. The S&P 500 Index closed out its worst first half of the year since 1970, as was widely reported. Markets were slated to be closed on Monday, July 4, in observance of the Independence Day holiday. Shares in Europe fell on fears that soaring inflation and rising interest rates could hit earnings and tip economies into a recession. In local currency terms, the pan-European STOXX Europe 600 Index ended the week 1.40% lower, while Germany’s DAX Index pulled back 2.33%, France’s CAC 40 lost 2.34%, and Italy’s FTSE MIB dropped 3.46%. The UK’s FTSE 100 Index declined 0.56%, supported by a weaker British pound against the U.S. dollar. UK stocks tend to perform relatively well when the pound falls because many companies that are part of the index are multinationals with overseas revenues.

On the other side of the world, Japan’s stock markets generated a negative return for the week, with the Nikkei 225 Index falling 2.10% and the broader TOPIX Index down 1.16%. The escalating risk of a global recession prompted by major central banks aggressively raising interest rates to combat inflation continued to pose a headwind. Chinese stocks advanced on the back of strong factory data and easing coronavirus restrictions for travelers. The broad, capitalization-weighted Shanghai Composite Index rose 1.3%, and the blue chip CSI 300 Index, which tracks the largest listed companies in Shanghai and Shenzhen, gained 1.6%, Reuters reported.

On the economic side, most of the data missed consensus expectations, and some signals suggested that economic activity might even be slowing. The equity sell-off started in earnest on Tuesday morning, when the Conference Board’s index of consumer confidence came in much lower than anticipated and a measure of manufacturing activity in the Mid-Atlantic region fell to levels not seen since the height of the pandemic. On Wednesday, the closely watched data on May personal consumption expenditures (PCE), indicated that consumers were also pulling back. Adjusted for inflation, purchases fell 0.4% in May, the first decline in 2022, driven by a 1.6% drop in goods purchases; purchases of services rose 0.3%, but much of the increase was driven by spending on housing and health care.

Inflation-adjusted disposable income, reported Thursday, fell 0.1% over the month. Furthermore, the PCE data were enough to push the Atlanta Fed’s GDPNow model estimate of annualized growth in the second quarter down to -1.0%, which indicates a recession. However, many economists note that a record trade deficit early in the year skewed the data. Durable goods orders, in May, surprised on the upside, especially when controlling for defense (0.6% versus roughly -0.5%). Gauges of current factory activity indicated continued expansion, but at the slowest pace since the summer of 2020. While anecdotal reports of scattered hiring freezes and layoffs continued to intensify, weekly jobless claims came in roughly in line with expectations at 231,000—within a narrow band of 231,000 to 232,000 where they have remained for four consecutive weeks. Claims bottomed at 181,000 for the week ended April 24.

The silver lining for investors in the PCE data was a downside surprise in inflation signals. The Fed’s preferred inflation gauge, the core (less food and energy) PCE price index came in at 4.7% for the 12 months ended in May, slightly below expectations and the lowest level since November. Along with the sluggish economic data, this appeared to help push the yield on the benchmark 10-year U.S. Treasury Note as low as 2.79% in Friday trading.

Economic data in Europe are as follows: inflation accelerated to another record high of 8.6% in June, driven by soaring energy and food costs, according to Eurostat’s early estimate. A European Commission survey showed that economic sentiment weakened as pessimism among consumers deepened and retail confidence deteriorated. Seasonally adjusted unemployment in Germany unexpectedly rose to 5.3% in June from 5% in May—the first increase in more than a year—after Ukrainian refugees were added to social security data for the first time, according to the Bundesbank.

Data in Japan shows that The Bank of Japan’s quarterly Tankan corporate survey showed that sentiment among large manufacturers deteriorated in the three months to the end of June. The worsening reflected concerns about China’s coronavirus lockdowns and prolonged supply chain constraints. On the other hand, confidence among services sector firms, which benefited from the lifting of domestic coronavirus restrictions, improved. Separate data showed that factory output fell sharply in May, with vehicle production particularly weak. Core consumer prices in Tokyo rose 2.1% year on year in June, heightening the chances that nationwide inflation will continue to rise in the coming months. While the BoJ’s inflation expectations have risen—particularly in the short term and at a more moderate pace over the medium to long term—inflation, excluding such factors as energy, remains low compared with other G-7 nations.

In this awful week for investors there has been no shift in the top five so it remains a close race to the finish next week. A couple hundred years ago this date was one of extreme significance in the USA because On July 4, 1776, the Second Continental Congress unanimously adopted the Declaration of Independence to announce the colonies' separation from the Kingdom of Great Britain. Let us look at the IG’s that are linked and whether they have taken this year as an opportunity to declare independence. One group that has definitely done so is BROOD, ranking fifth with their counterpart -Hera Moneta- ranking 35, they have definitely declared independence from their former counterpart and withering empire. The other way around Batavia Vrouwen have surpassed their male counterparts in extreme fashion, there seems to be little question as to who is the ruler and the ruled. I even heard something about a bet where the punishment is for either group to step in the glorious fountain on the Weena if they lost; let's see if the fellows will honour this commitment.
One week to go! 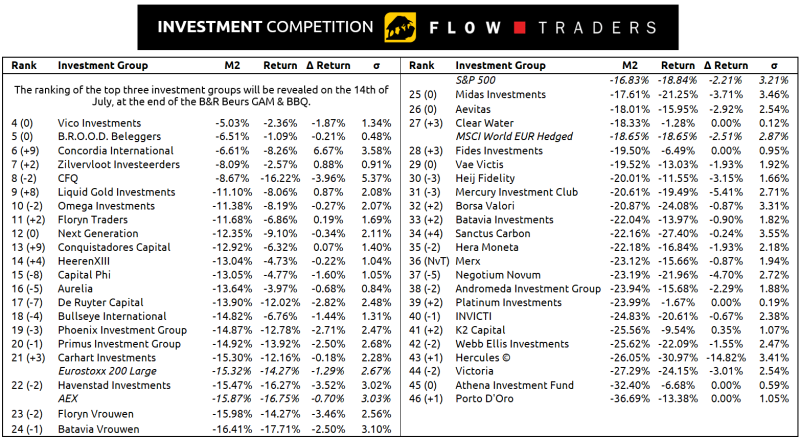