This week felt like a throwback to last year when stock indices kept rising. Mainly driven by large-cap tech stocks the S&P 500, Nasdaq 100, and Dow Jones Industrial Index were all in positive theory with returns of 3.1%, 5.7%, and 2% respectively. This takes the S&P 500 out of bear market territory, which could have a positive effect on the perception of investors in the coming weeks.

In Europe, the story was not much different as all the major indices, as well as the Eurostoxx 50, rose during the past week. The best performer this week was the AEX which rose approximately 2.3% during the week, while the worst performer was the FTSE 100 with a return of 0.4%.

The latter could be due to the resignation of Boris Johnson, whose position was no longer tenable after a series of scandals that included hosting parties while social distancing measures were in place, which the British have labeled as ‘Partygate’. The resignation of Boris Johnson could be a positive thing for British stocks in the near future but all will depend on the views of the new prime minister of the United Kingdom. Other economic news in Europe was mixed this week with inflation in the Netherlands and Germany coming in below expectations and down from highs in May, but Eurozone inflation coming in at a record high of 8.6% vs 8.1% in May.

Meanwhile, in the US, job market data was positive as the US added 372K jobs in June, which was significantly above the 250k estimate of the Dow Jones. At the same time, unemployment rates remained stable at 3.6%. Unfortunately, this does not take away the risk of a recession as rising payrolls were common before a recession during the inflationary 1970s. Furthermore, this also increases the likelihood of a rate hike during the coming Fed meeting as businesses are still looking for far more employees than are available. It will therefore be interesting to see how this will play out in the coming month(s).

It has been some week. Supposedly cucumber time has struck but you wouldn’t know it from reading the papers. Everything from protests to apologies, from national tennis disappointments to possible national football pride, nobody can reasonably say that the news is over.
What is over is the competition!
We have witnessed a competition that has been the most riveting in years and possibly years to come. Such a competition filled with action can only be paralleled by one of the great movies in history; Forrest Gump. So for the final competition update let us look at the characters and see which character summarizes the profile sketch of which IG in this competition. For the sake of a metaphorical drum roll I will not include any of the top three investment groups.

To start us off is Jenny; where they seem to distinguish themselves by ineptitude throughout the entire film the lovable character of Jenny makes bad decisions after bad decisions but at the end does the right thing and although she is not successful or happy she does possess the power of likability (Borsa Valori).

Next, A character that shines by their darkness, lieutenant Dan. Where they were hoping to die in the line of fire as has happened for many generations they get merely injured and make the most of their life in spite of the sorriness of their temper and foulness of their mood (Merx).

Now to a character that shows the complexity of a simpleton and graces the screen with his gracelessness; Bubba. This character shows a mind of single focus without focus and goes through life without a care in the world showing that ignorance in fact is bliss (Batavia Investments).

To the title bearer, the one who rises the ladder of society without social skills, the captain without a clue and the investor without an iota of ideas, Forrest Gump himself. They start off not being able to walk but run through life subsequently with the ease like one hasn’t seen since. They understand the game and regardless of their seeming inabilities and misfortunes rise to the table and sprint where others walk. This character also shows that people shouldn’t judge a dumb looking book by its cover because remember: stupid is as stupid does (CFQ).

These are for now the main characters but the real main characters are present in the top three of the leaderboard of whom the winner will be announced this Thursday so make sure to visit Apartt and see who can scribble their name into the cup of victors.

This is the end of this year's competition updates but we will see next year what happens although we can never predict because like momma always said “life is like a box of chocolates, you never know what you gonna get.” 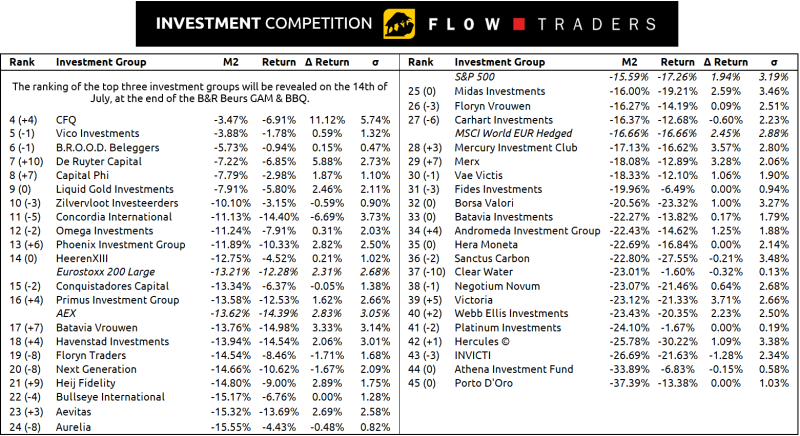