Yesterday, the World Cup 2022 started with the host country Qatar facing off against Ecuador. This World Cup has been a very controversial topic from the start, due to the labor conditions and the attitude towards women and LGBTQ+ people. Still, of course, everybody hopes that their home country will win the World Cup. The anticipation and excitement that comes with the World Cup is also visible in the stock markets. Trading during matches is not recommended as the levels of volatility fluctuate a lot. Before the match, many investors fill their orders, leading to increased volatility. This volatility decreases significantly during the match as all eyes are on the match. Therefore, it is best to start trading after the game has finished for more than 30 minutes. Not only the timing of the matches appears to have an effect on the markets, also the outcomes of the matches influence local markets. Research has shown that when a country loses their match, and is possibly eliminated from the World Cup, the market of that country performs significantly below average.

On November 11th 2022, crypto exchange FTX group filed for a Chapter 11 bankruptcy. This bankruptcy filing is due to a liquidity crisis and the allegations that the exchange mishandled its clients funds.  It has now been revealed that the businesses owe their creditors more than $3 billion. This weekend FTX launched a review of its assets and plans to reorganize or sell some of its businesses. A lot regarding the bankruptcy is still unclear as the case is still to come for the Bankruptcy Court. The expectation is that many of the creditors of FTX will not get (all of) their money back and that this bankruptcy will only lower the confidence in the crypto market even further. It is unclear how this will end for FTX group and its creditors, however, it is clear that many parties have failed in this case and that more regulations regarding cryptocurrencies might be necessary.

This week we have 18 Investment Groups already participating in the Investment Competition. The M2 was also introduced to the competition this week, leading to a new leader, namely Capital Phi. Their M2 is more than three times higher than the M2 of our second place holder, Porto d’Oro. Are these the perks of having the Commissioner of Education & Career in your Investment Group? The group with the highest weekly return was Merx, outperforming Eurostoxx, MSCI and S&P. On the other hand we have Borsa Valori, with an M2 of -5.05% and a negative return of 0.45%, they did not come close to beating any market.

For next week, I urge the other investment groups to start participating in the Investment Competition! 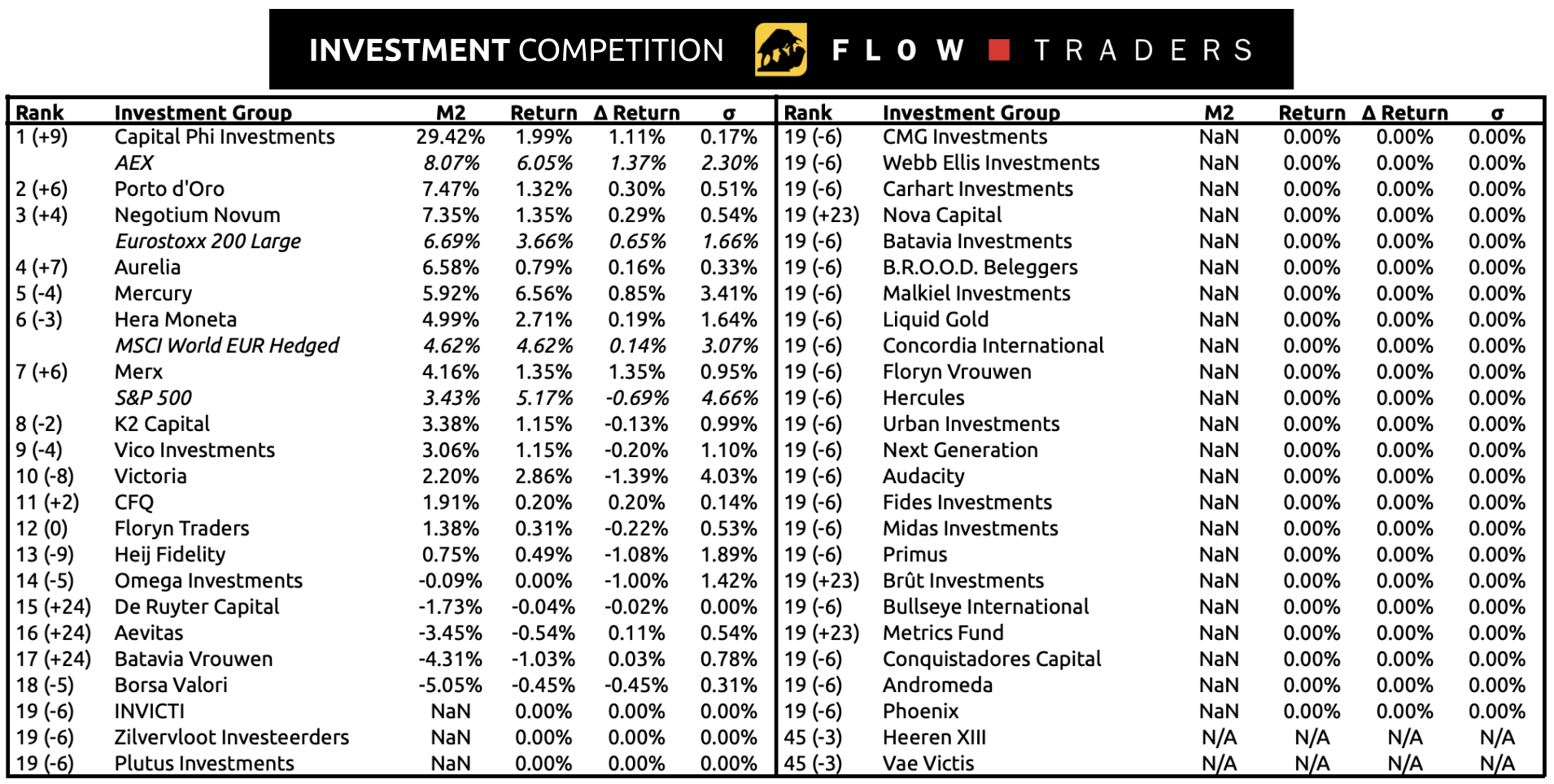